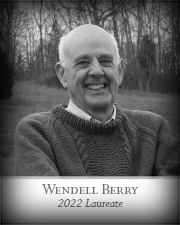 The 2022 Henry Hope Reed Award will be presented to Wendell Berry, an American poet, novelist, cultural critic, environmentalist and farmer, for his contributions to the discourse about nature and the city.

“Berry is the bard of rural life in America, a writer and poet whose work speaks for the Earth and challenges us to appreciate and steward nature as the foundation of our sustenance, our well-being and a reflection of who we are as a culture,” said Polyzoides. “His writing and commentary have had an indirect but still profound influence on our built environment, offering inspiration and direction as to where and how nature should prevail over architecture, a fundamental question for our age.”

The jury citation reads, “Over the years, humanity has increasingly encroached upon natural landscapes with little regard for the long-term urban and environmental impact. Berry has been a voice of conscience in advocating for the conservation of the miracle and the bounty that is nature, proposing a relationship between places and people that honors and protects both.”

The author of many books of poetry, fiction, essays and criticism, Berry has maintained a farm in Port Royal, Kentucky, for more than 50 years. Among his many honors, he was the recipient of the National Humanities Medal, bestowed by President Barack Obama in 2010. His other honors include the Ivan Sandrof Life Achievement Award by the National Book Critics Circle, the T.S. Eliot Prize, the Aiken Taylor Award for poetry, the John Hay Award of the Orion Society, and the Richard C. Holbrooke Distinguished Achievement Award of the Dayton Literary Peace Prize.