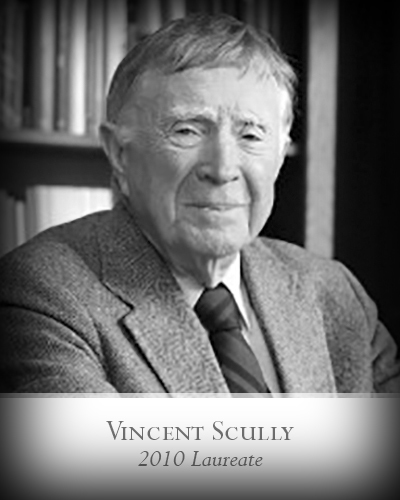 Vincent J. Scully, the legendary Yale professor and inspirational leader of the preservationist movement, has been named the 2010 Henry Hope Reed Award laureate. Scully has influenced generations of students through his popular lectures on art and architectural history. His shining example extends beyond the classroom to the American city itself, which he has strived to protect from the blight of sprawl and the destructive “urban renewal” of the 1960s and ’70s.

As a professor and author of more than 20 books, Scully has served as a mentor to many leaders in architecture, art history, preservation, and criticism. Architect Phillip Johnson called Scully “the most influential architectural teacher ever.” Scully is a trustee emeritus for the National Trust for Historic Preservation and a winner of the National Medal of Arts, the highest honor the United States bestows on artists and patrons. Since 1999, the National Building Museum has presented the Vincent Scully Prize to honor practice, scholarship, and criticism in architecture, historic preservation, and urban design. Laureates have included Jane Jacobs and Prince Charles.

Scully grew up in New Haven, Connecticut, finding inspiration for his life’s work in the city of his youth. He enrolled at Yale at age 16 and received a BA in 1940. After serving as a Marine in World War II, Scully returned to Yale, earning a PhD in 1949, and spending his academic career as one of the University’s most beloved lecturers.