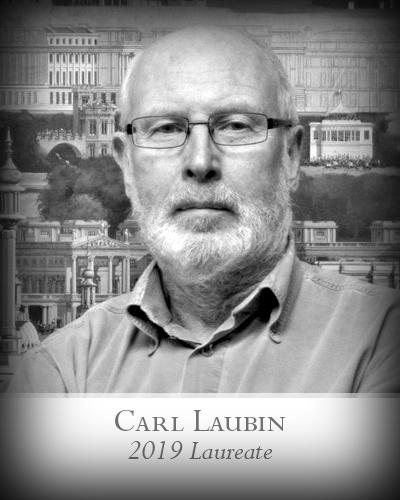 Carl Laubin, a renowned painter in the classical tradition, will receive the 2019 Henry Hope Reed Award. The $50,000 prize is presented annually by the University of Notre Dame to an individual working outside the practice of architecture who has supported the culture of the traditional city through its architecture and art.

“With his stunningly detailed capricci, Carl Laubin has brought another dimension to the work of architects both past and present, allowing a glimpse into a beautiful world, sometimes real and sometimes imagined,” said Richard H. Driehaus, founder and chairman of Chicago-based Driehaus Capital Management LLC. “Both Laubin and [2019 Driehaus Prize laureate] Culot have been instrumental in redefining classicism in a modern context.”

“In this digital age, Laubin creates beautiful paintings by hand with extraordinary skill and an ability to connect his painting to a larger body of knowledge. His work expresses ideas that embrace architecture and urbanism as a continuity, celebrating the commonality of cultures through time and place,” according to the jury citation. It continues, “Laubin’s work reflects the complexity of both the structure of the painting and the composition of the buildings, with each building relating to the others and to its context. Through the thematic and formal relationships in his paintings Laubin asks us questions about both how the world is and how it ought to be.”

After receiving a Bachelor of Architecture from Cornell University, Laubin moved to London in 1973 where he worked for a number of architectural firms. While working for Jeremy Dixon, Laubin was encouraged to make his first architectural paintings, going on to illustrate the firm’s redevelopment of the Royal Opera House. In 1986, he fully devoted his career to painting. Laubin is perhaps best known for his architectural capricci. While his work centers on architecture, it includes many landscapes, paintings of sculpture and occasional portraits.

The Henry Hope Reed Award will be presented to Laubin on March 23 (Saturday) at a celebration in Chicago. The award ceremony will also honor Maurice Culot, a Paris-based architect, urbanist, theorist and critic who is the recipient of the 2019 Richard H. Driehaus Prize at the University of Notre Dame.