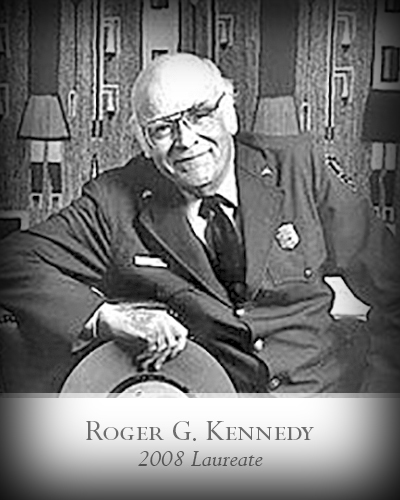 Roger G. Kennedy was named the 2008 recipient of the Henry Hope Reed Award. It was presented in conjunction with the Richard H. Driehaus Prize for Classical Architecture on March 29 at the John B. Murphy Memorial Auditorium in Chicago. Kennedy, the National Park Service director under President Clinton for four years, is the author of Greek Revival America and Wildfire and Americans: How to Save Lives, Property and Your Tax Dollars, as well as an historian, teacher and public servant. Kennedy is respected for his tireless advocacy for sound environmental practices and sustainability.

During his distinguished career, Kennedy has written 12 books on American history, architectural history, and public affairs, and is editor and co-editor of many others, including several on architecture and urban planning. Kennedy was General Editor and wrote the prefaces for each of the 12 volumes of The Smithsonian Guide to Historic America. At NBC, he covered the White House and the Supreme Court, and was a correspondent for Monitor, The Today Show and other news programs. In the 1970s he wrote and presented half-hour documentaries for regional PBS, and in the 1980s was presenter and writer of two series for the Discovery Channel:Roger Kennedy’s Rediscovering America and The Smithsonian Presents Invention.

Roger Kennedy earned his BA from Yale University and his law degree from the University of Minnesota Law School. He is an Honorary Member of the American Institute of Architects (AIA), and has won the Silver Medal of the NY Film Critics. A new book,When Art Worked: The Art of the New Deal Period, will be released later this year.