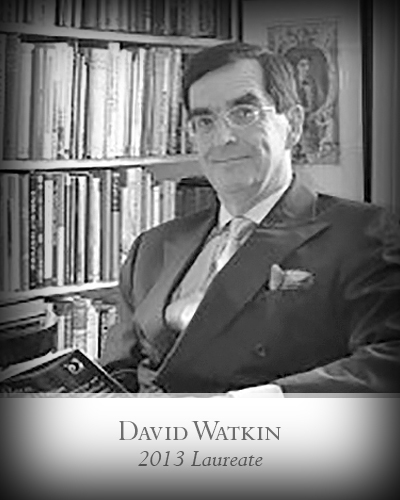 Acclaimed architectural historian David Watkin has been named the 2013 Henry Hope Reed Award laureate. Watkin will receive the $50,000 Reed Award in Chicago at a March 23 ceremony in conjunction with the Richard H. Driehaus Prize at the University of Notre Dame, which will be presented to Thomas H. Beeby.

David Watkin’s books include A History of Western Architecture and English Architecture: A Concise History. He is the recipient of the Banister Fletcher award for his Sir John Soane: Enlightenment Thought and the Royal Academy Lectures (1996), which was published by Cambridge University Press.

He first received international attention with his book Morality and Architecture: The Development of a Theme in Architectural History and Theory from the Gothic Revival to the Modern Movement (1977), which he expanded and republished under the title Morality and Architecture Revisited (2001). In these works, Watkin challenges the prevailing interpretation of the language used to describe modernist architecture, which claims to be rational and truthful, reflecting the needs of the contemporary society.

“Through his prolific output David Watkin has given us a renewed and refreshing view of our past, present, and future by challenging contemporary attitudes that illustrate history as a series of distinct periods identified by the spirit of the age,” says Michael Lykoudis, Dean of the University of Notre Dame School of Architecture. “He has proposed a framework that respects the primacy of the interconnectedness of cultures, yet celebrates these attributes that give each time and place its distinctiveness and character.”

Together with the Driehaus Prize, the Reed Award represents the most significant recognition for classicism in the contemporary built environment. Recipients are selected by a jury comprised of Adele Chatfield-Taylor (President of the American Academy in Rome), Robert Davis (Developer and Founder of Seaside, Florida), Paul Goldberger (Architecture Critic for Vanity Fair), Léon Krier (Inaugural Driehaus Prize Laureate), Demetri Porphyrios (architect, author and 2004 Driehaus Prize Laureate) and Witold Rybczynski (Meyerson Professor Emeritus of Urbanism at the University of Pennsylvania).