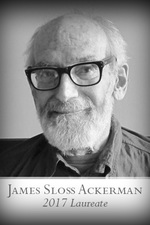 In conjunction with the Driehaus Prize, the $50,000 Henry Hope Reed Award, given annually to an individual working outside the practice of architecture who has supported the cultivation of the traditional city, its architecture, and art, will be presented posthumously to architectural historian James Sloss Ackerman.

The award ceremony on March 25 will also honor the Henry Hope Reed Award laureate, James Sloss Ackerman, who until his death several weeks ago was the Arthur Kingsley Professor of Fine Arts Emeritus at Harvard University. Perhaps best known for his studies of Michelangelo and Palladio, Ackerman produced an extensive body of original scholarship, skillfully written and carefully sourced. Ackerman received his bachelor’s degree from Yale in 1941 and went on to further studies at New York University, earning a master's degree in 1947 and doctorate in 1952.

“James Ackerman’s immense contributions to contemporary understanding of Renaissance architecture have greatly influenced not only the field of architectural history but the practice of architecture today,” stated Driehaus. “His work brought the past to life, allowing generations of architects to learn from the early masters of the craft.”