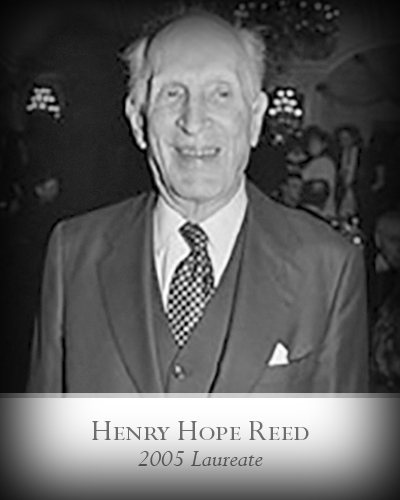 Henry Hope Reed was the inaugural recipient of an award named in his honor presented March 19 at the University Club of Chicago in conjunction with The Richard H. Driehaus Prize for Classical Architecture. For half a century, Reed has promoted classical traditions in architecture and its allied arts, educating the public about the importance of grandeur in the design of monuments and institutional buildings.

In 1959, Reed published the popular book, The Golden City, drawn from his experiences as a lecturer in the Department of Urban Planning at Yale, his research on architecture and urbanism, and his walking tours of Manhattan’s historic architecture. During the 1960s, he served as the first curator of New York City parks. In 1968, Reed co-founded Classical America, an organization committed to a resurgence of the grand tradition in American design. Classical America joined forces with The Institute of Classical Architecture in 2004. Reed’s works also include The New York Public Library: Its Architecture and Decoration and The U.S. Capitol: Its Lesson for Today.

For more than half a century, Henry Hope Reed has been the foremost spokesman for the cause of tradition in civic design. This focus has not been narrowly architectural; rather it has embraced the unity of the arts as the key to grandeur in the public realm. No one has done more to highlight the enduring vitality of the Classical tradition in architecture and its allied arts than Henry Hope Reed. He has led the education of the public about the keys to grandeur in the design of monuments and institutional buildings.

During the 1960s, Mr. Reed served, successively, as the first curator of Central Park and the first curator of parks for New York City. In 1968 he co-founded Classical America, the pioneering organization that promoted the current resurgence of the grand tradition in American design and which joined forces in 2004 with The Institute of Classical Architecture. For many years, Mr. Reed served as President of Classical America and co-editor of the Classical America Series in Art and Architecture, which has made valuable out-of-print books available while offering new works.