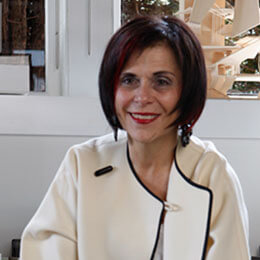 Judith DiMaio is a licensed architect, renowned scholar, and educator whose work emphasizes the active, interdisciplinary collaboration of building design, technology, and history. She is Dean Emeritus for the School of Architecture and Design at New York Institute of Technology and was previously an associate professor at Yale’s School of Architecture and director of Yale College’s Architecture program. DiMaio has been a visiting professor and lecturer at colleges and universities including Columbia, Cornell, Rhode Island School of Design, Rice University, and the University of Chicago; an invited lecturer at Magdalen College, Oxford; and served as academic director of the Rome Studies Program for four years.

A specialist in 16th century Italian architecture, gardens, and painting, DiMaio is renowned for the depth of her knowledge, insight, and commitment to the primacy of architecture as artistic creation. She was awarded the Rome Prize in Architecture by the American Academy in Rome in 1977, a Fulbright-Hays scholarship in 1979, and became the American Academy’s first Colin Rowe Resident in Design in 2009. She is a founding member of the board of trustees of Restoring Ancient Stabiae, a frequent juror for national and international design competitions, and a widely published author of essays on Italian art and architecture.