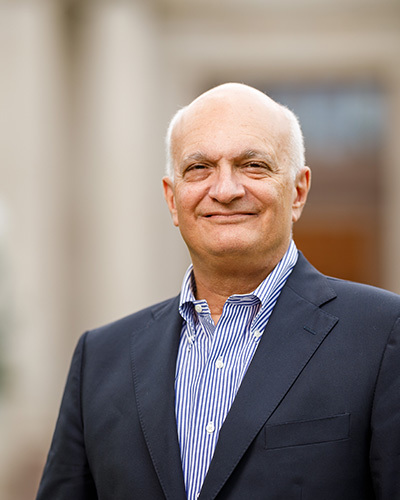 Michael Lykoudis has served as Professor of Architecture at Notre Dame since 1991. From 2004 to 2020 he served as the School’s first Dean following two years as Chair and eight years as Assistant and Associate Chair.  He has devoted his career to the building, study and promotion of traditional architecture and urbanism as a way of addressing the critical issues of our time facing the built and natural environment.

Lykoudis developed the Richard H. Driehaus Prize at the University of Notre Dame, the largest architectural prize in the world that is given annually.  The Prize celebrates the shared building traditions of the world by recognizing a living architect who has made a lifetime contribution to architecture and urbanism.  He serves on the jury of the Rafael Manzano Prize for New Traditional Architecture in Madrid.  Both prizes are dedicated to traditional urbanism and architecture.  He is a member of: the Congress for The New Urbanism (CNU), International Network for Traditional Building Arts and Urbanism (INTBAU) and was elected to the College of Fellows of The American Institute of Architects.  Dean Lykoudis is on the Committee of Honour for INTBAU and previously served on the Board of Directors for the Institute of Classical Architecture and Art (ICAA).

In addition to being Chair and Dean, as Assistant/Associate Chair and Director of Undergraduate Studies for over 10 years, Lykoudis was the principal organizer of the new traditional and urbanist curriculum and established several new initiatives within the School of Architecture. In partnership with several organizations engaged in the renewal of downtown South Bend, he led several design charrettes that resulted in a master plan for the city that has allowed a revisioning for the central business district to include two-way streets, mixed use and increased density for the downtown.  He initiated the renewal of the School’s graduate program with the objective of doubling its enrollment, increasing its offerings and developing its focus on classical architecture and urbanism.  He was the driving force behind the School’s Real Estate initiative emphasizing the importance of place-making and resilient urbanism, which led to the School’s involvement in the interdisciplinary Real Estate Institute launched by the University. He has lectured at universities around the country and abroad as well as to professional and civic organizations.

His activities feature the organization of major conferences that have been collaborations between Notre Dame and other organizations including the Institute for Classical Architecture & Art, A Vision of Europe and the Congress for New Urbanism. The conference and exhibition entitled “The Art of Building Cities,” took place in 1995 at the Art Institute of Chicago and was the first event in this country to specifically link the practice of contemporary traditional architecture with the new urbanism. An exhibition and conference titled “The Other Modern,” took place in Bologna, Italy in 2000, and a conference titled "Three Generations of Classical Architects: The Renewal of Modern Architecture" was held in October 2005 at Notre Dame. With respect to publications,  Dean Lykoudis co-edited "Building Cities," and "The Other Modern" exhibition catalogues and has contributed numerous essays to journals, books and other media venues.

A graduate of Cornell University, Lykoudis earned his Master of Architecture degree from the University of Illinois with a concentration in business and real estate. Prior to joining the Notre Dame faculty, he worked as a project designer and architect for firms in Florida, Greece, Connecticut and New York. He has directed his own practice since 1983 in Athens, Stamford, and now in South Bend.