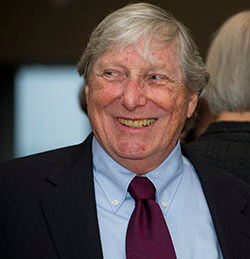 Prof. Carroll William Westfall came to Notre Dame in 1998 as Frank Montana Professor and Chairman of the School of Architecture. He served as Chairman from 1998 to 2002.

Before coming to Notre Dame, Prof. Westfall taught at Amherst College, the University of Illinois in Chicago, and, since 1982, at the University of Virginia. His undergraduate training at the University of California was followed by completion of a Master's degree at the University of Manchester (thesis topic: "The Greek Revival Movement in Italian Architecture: 1750) and a Ph.D. at Columbia University (1967 dissertation: "The Two Ideal Cities in the Early Renaissance: Republic and Ducal Thought in Quattrocento Architectural Treatises" prepared under the supervision of Professors R. Wittkower and P.O. Kristeller). His initial work led to numerous articles and a book, In This Most Perfect Paradise (Penn State University Press, 1974), a study of Renaissance Rome. His more recent studies of the relationship between the history, theory, and practice of architecture are found in his contribution to the 1991 book Architectural Principles in the Age of Historicism (Yale University Press), written with Robert Jan van Pelt.

A central theme of all of his studies has been the history of the city with particular attention to the reciprocity between the political life and the urban and architectural elements that serve the needs of citizens. His emphasis is on the usefulness of knowledge of history to practicing architects. This, rather than a stylistically based interpretation of the history of architecture, has informed all of his work. His current interests are concentrated on the architect s capacity to nourish the Christian faith and on tradition and classicism in architecture and the American city with special attention to the role of Thomas Jefferson in founding a distinctive American architecture to serve a unique nation.

Familiarly known as Bill, Prof. Westfall was born in Fresno, California December 23,1937. Married since 1982 to Relling Rossi Westfall, they have two sons, Nicholas William (b. 1991) and John Salvatore (1995). He maintains his membership at Saint Thomas Episcopal Church, Richmond, Virginia.