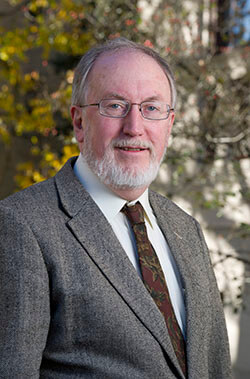 James A. and Louise F. Nolen Professor of the Practice

Alan DeFrees is a 1974 graduate of the University of Notre Dame and became a registered architect in 1979 and NCARB certified in 1980. In the 1990’s he taught part-time at the Notre Dame School of Architecture and full-time since 2000 in a variety of topics from computer graphics to historic construction and preservation. He has been honored with several Educator of the Year awards from student organizations, and has been twice honored with the Rev. Edmund P. Joyce, CSC Award for Excellence in Undergraduate Teaching. In November, 2015, he was recognized by DesignIntelligence as one of the “25 Most Admired Educators for 2016”, saying: “Constantly pursuing knowledge in the field of building technology, Alan DeFrees is known as a passionate professor who is truly dedicated to teaching the technical aspects of architecture.”

His professional practice spans nearly three decades and includes office and retail buildings, sports facilities, restaurants, and school, church and hospital additions. Since 1990 he has focused on a range of residential work from low-cost urban in-fill projects to high-end residences and condominiums, including many homes along Lake Michigan.

Prof. DeFrees has used computers in architectural applications since 1979 including computer programming for structural engineering, energy design and perspective drawing. His computer-aided drawing and graphic-design experience date back to 1988. Prof. DeFrees is an accomplished woodworker whose work in sculpture and furniture has appeared in many exhibitions and publications.

Educator of the Year, University of Notre Dame School of Architecture, 2015

Nomination for the national AIAS Educator Award  (one of three in the nation), 2000

School of Architecture Task Force on the Environment 2007-2008