The Driehaus Prize at the University of Notre Dame was presented to architect Michael Graves at a ceremony Saturday, March 24, at Chicago’s John B. Murphy Auditorium, just off the Magnificent Mile.

Graves is Founding Principal of the firm Michael Graves & Associates (MGA) and the Robert Schirmer Professor of Architecture, Emeritus at Princeton University, where he taught for 39 years. At Princeton, Graves reintroduced the principles of traditional and classical composition and also brought a dedication to urbanism. Receiving the Rome Prize in 1960 as a scholar at the American Academy in Rome, where he is now a Trustee, Graves was influenced by “the timeless grammar” of architecture that he has applied to his own work. Members of the Driehaus Prize jury commended his commitment to the traditional city—in its human scale, complexity, and vitality—as emblematic of a time-tested sustainability. 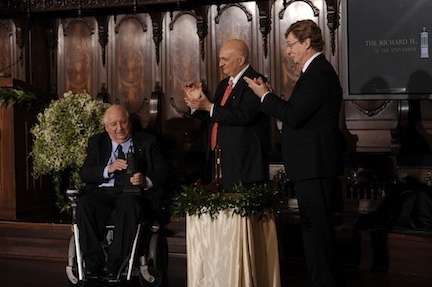 Graves’ influential designs, extending from buildings including the iconic Denver Central Library to everyday objects such as his celebrated Alessi teakettle, reflect the breadth of his interests and the depth of his humanistic instincts. Attention to enhancing the user experience characterizes all his work, from luxury goods to products for Target Stores.

Established in 2003 through the University of Notre Dame School of Architecture, the $200,000 Driehaus Prize honors lifetime contributions to traditional, classical, and sustainable architecture and urbanism in the modern world. The Driehaus Prize represents the most significant recognition for classicism in the contemporary built environment. In conjunction with the Driehaus Prize, Elizabeth Barlow Rogers, acclaimed writer and landscape preservationist was the 2012 Henry Hope Reed Award laureate. Rogers received the $50,000 Reed Award at the ceremony.