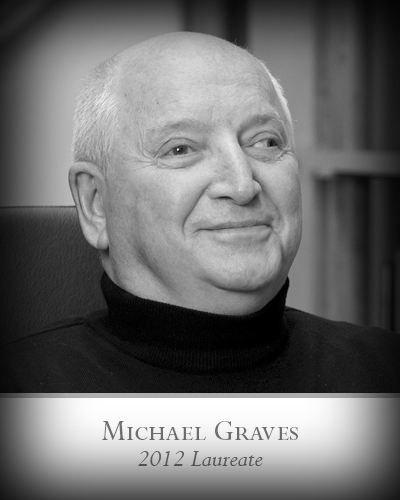 Michael Graves, whose celebrated career redefined the architect’s role in society, has been named the recipient of the 2012 Richard H. Driehaus Prize at the University of Notre Dame. Graves, the tenth Driehaus Prize laureate, will receive $200,000 and a bronze miniature of the Choregic Monument of Lysikrates during a March 24 ceremony in Chicago.

Graves is Founding Principal of the firm Michael Graves & Associates (MGA) and the Robert Schirmer Professor of Architecture, Emeritus at Princeton University, where he taught for 39 years. At Princeton, Graves reintroduced the principles of traditional and classical composition and also brought a dedication to urbanism to a modernist curriculum. Receiving the Rome Prize in 1960 as a scholar at the American Academy in Rome, where he is now a Trustee, Graves was influenced by “the timeless grammar” of architecture that he has applied to his own work. Members of the Driehaus Prize jury commended his commitment to the traditional city—in its human scale, complexity, and vitality—as emblematic of a time-tested sustainability.

In structures such as the Portland (Oregon) Public Services Building and Humana Corporation headquarters in Louisville, Kentucky, Graves’ designs are characterized for their attention to detail and dignity. His concern for the character of his buildings extends to his interior design, the lighting, fixtures, and furniture that he regards as essential to the overall character he aspires to create.

Graves considers himself a “general practitioner.” His influential designs, extending from buildings including the iconic Denver Central Library to everyday objects such as his celebrated Alessi teakettle, reflect the breadth of his interests and the depth of his humanistic instincts. Attention to enhancing the user experience characterizes all his work, from luxury goods to products for Target Stores. The beauty and quality of ordinary objects, Graves believes, have the power to affect the soul.

Graves also views urbanism as a vital part of the built environment. His master plans impart a sense of community and place, while establishing a framework for sustainable, cohesive growth. For more than 12 years, MGA has been the campus master planner for Rice University, resulting in approximately 27 building projects, including three residential colleges for the North Campus.

“Michael Graves has enhanced not just the architecture profession with his talent and scholarship, but everyday life itself through his inspiring attention to beautiful and accessible design,” says Michael Lykoudis, Driehaus Prize Jury Chair and Francis and Kathleen Rooney Dean of the University of Notre Dame School of Architecture. “The quality and scope of his work have enhanced how people work, live, and interact in public and private realms, making a profound impact on American life.”

Established in 2003 through the University of Notre Dame School of Architecture, the Richard H. Driehaus Prize honors lifetime contributions to traditional, classical, and sustainable architecture and urbanism in the modern world. The Driehaus Prize represents the most significant recognition for classicism in the contemporary built environment.

Recipients are selected by a jury comprised of Adele Chatfield-Taylor (President of the American Academy in Rome), Robert Davis (Developer and Founder of Seaside, Florida), Richard H. Driehaus (Founder and Chairman of Driehaus Capital Management), Paul Goldberger (Architecture Critic for The New Yorker), Léon Krier (Inaugural Driehaus Prize Laureate), Michael Lykoudis (Francis and Kathleen Rooney Dean of the University of Notre Dame School of Architecture), and Witold Rybczynski (Meyerson Professor of Urbanism at the University of Pennsylvania and Architecture Critic for Slate).