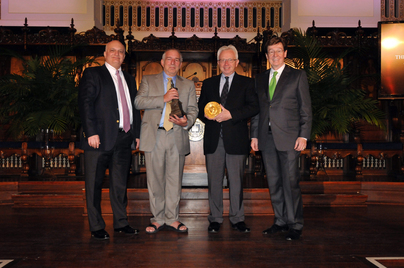 David M. Schwarz, an architect known for excellence in traditional design and his commitment to the creation of vibrant public environments, received the 2015 Richard H. Driehaus Prize at the University of Notre Dame during a ceremony on Saturday, March 21, in Chicago.

In conjunction with the Driehaus Prize, renowned environmental health expert Dr. Richard J. Jackson received the Henry Hope Reed Award, given annually to an individual working outside the practice of architecture who has supported the cultivation of the traditional city, its architecture and art.
The award ceremony also featured a colloquium moderated by Geoffrey Baer of WTTW with the theme: "Public Space in Modern Society." The panelists were this year's laureates, David Schwarz and Dr. Richard Jackson, along with Elizabeth Plater-Zyberk, the former Dean of the School of Architecture at the University of Miami and 2001 recipient of the Scully Prize, as well as Edward Perry Bass, the 2007 Henry Hope Reed laureate.
Click here to watch David M. Schwarz's acceptance speech.
Click here to watch Dr. Richard J. Jackson's acceptance speech.
Click here to watch the complete colloquium.