Roger G. Kennedy, the National Park Service director under President Clinton for four years and the 2008 Henry Hope Reed Aware laureate, died Friday, September 30, 2011, at age 85. The author of When Art Worked: The New Deal, Art, and Democracy and Greek Revival America, Kennedy was a historian, teacher and public servant. He will be remembered for his tireless advocacy for sound environmental practices and sustainability. Kennedy expanded the National Park Service’s role in teaching about America’s natural resources, history, and culture. 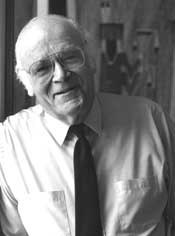 Throughout his distinguished career, Kennedy wrote 12 books on American history, architectural history, and public affairs, and was editor and co-editor of many others, including several on architecture and urban planning. Kennedy was General Editor and wrote the prefaces for each of the 12 volumes of The Smithsonian Guide to Historic America. As NBC News reported, Kennedy covered the White House and the Supreme Court, and was a correspondent for “Monitor,” “The Today Show” and other programs. In the 1970s he wrote and presented half-hour documentaries for regional PBS stations, and in the 1980s was presenter and writer of two series for the Discovery Channel: “Roger Kennedy’s Rediscovering America” and “The Smithsonian Presents Invention.”

“Roger Kennedy was a great humanist, citizen, and contributor to the public realm,” says Dean Michael Lykoudis of the School of Architecture at the University of Notre Dame, which represents the Henry Hope Reed Award in conjunction with The Richard H. Driehaus Prize for Classical Architecture, “and with him, an era has passed as well.”