Recreating a proto-Doric model from the sixth century BC is no small feat. Throughout the 2014-2015 academic year, students pursuing a Building Concentration at the University of Notre Dame School of Architecture worked on two models in an attempt to reconstruct the presumed forms of the proto-Doric system. Known as one of the three principal Greek columnar types, the Doric was the earliest to emerge and has remained essentially unchanged after the first stone temples were erected. 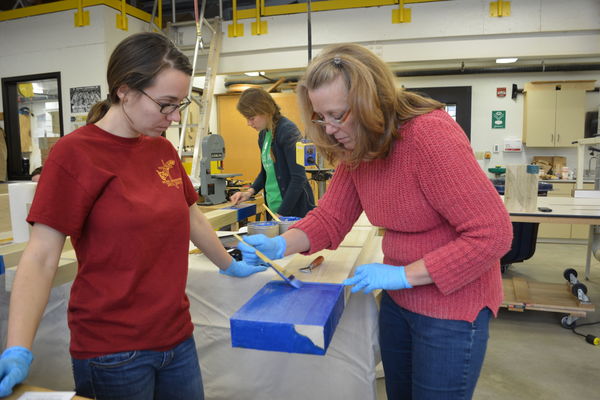 Michelle Ginter, a graduate student in the architecture program, and Kathryn Bevier from Enkaustikos Paints, apply layers of blue paint to a section of the Doric model.

Professors Richard Economakis and Kevin Buccellato set out to propose a new model for what may have been the original Doric system. The Doric system is generally considered to be inherently problematic and most modern attempts to reconstruct the original form often fall short of providing a convincing explanation of the system. The form is typically presented graphically relying on drawings rather than actual carpentry and building techniques. The models, a full-size entablature approximating the dimensions of the First Temple of Artemis Orthia in Sparta, and a study at a small scale that includes a section of the interior colonnade and roof, are the first modern attempt to reconstruct the presumed forms of the proto-Doric system using real materials, at full scale. 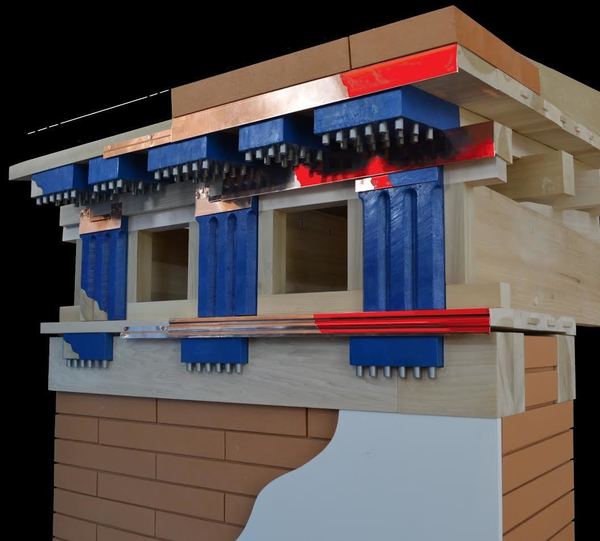 “Our approach is unusual because we propose an entirely different structural system for early Greek buildings than what has been assumed until now,” says Prof. Economakis, who also serves at the Director of Graduate Studies.  “Whereas most scholars assume columns used a 'post-and-lintel' methodology that simply carried beams, we believe that columns were held in place at the top with composite beams, using a system we call 'prop-and-brace'.”

The color scheme used for the reconstruction was chosen based on building materials and treatments used in earlier wooden buildings. The red paint represents copper flashing which is treated with red lead paint to prevent oxidization. The blue paint, which was used on triglyphs and other small Doric components, may represent an earlier use of anti-fungal copper paint on wood member s with exposed end-grain. 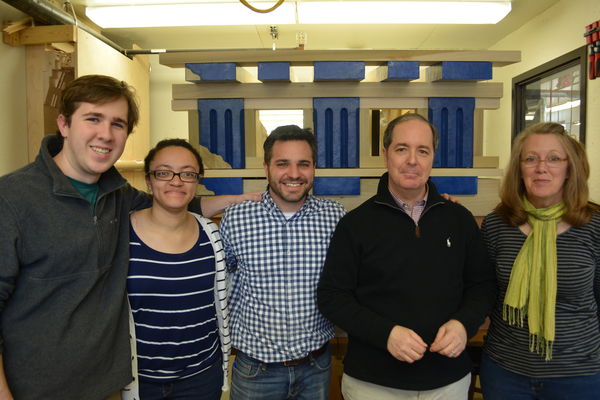 Professors Economakis and Buccellato expect a strong reaction from the archeological world because their research is primarily etiologic in nature. They hope the structural connections will open new approaches to the interpretation of archeological findings and spark further discussion around the origins of the Classic Orders.

Their research, though not complete, has already been presented at a number of venues, including the Society of Architectural Historians conference in Chicago and the 2015 Master of Building Arts Festival in South Carolina. In June 2015, Prof. Economakis presented the research at the Institute of Classical Architecture and Art in New York. An article by Economakis and Buccellato explaining the argumentation has been published in The Classicist magazine, Vol. No. 12, and further publications will be forthcoming.

Please visit the School of Architecture on Flickr for additional photos of the proto-Doric model.