‘Great promise.’ —  These words come to mind when reflecting on the past weekend spent with architectural students of Notre Dame.  Friday evening, I spoke to a full gallery of students and faculty about affordable, multi-century building.  It was a warm reception and a humbling experience presenting HFA to the top school of Classical Architecture in the country. 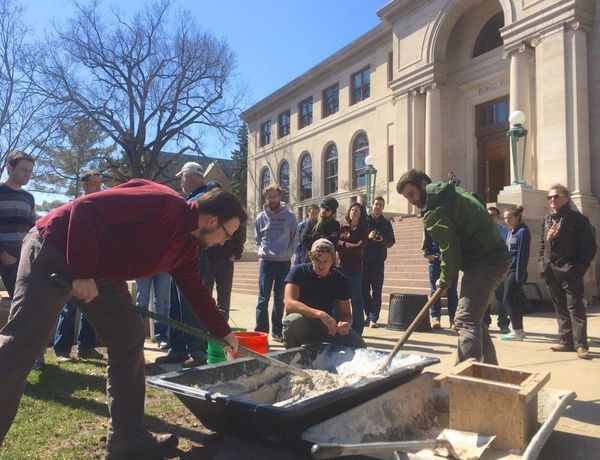 Almost 30 minutes of Q & A followed the talk.  Both students and faculty made detailed inquires that delved into the heart of what we’re doing and what we want to do further in terms of research.  I’ve had a number of occasions to speak to audiences about the HFA Initiative, but two instances in particular stand out: Partnering with Steve Mouzon at ‘rogue’ CNU Salt Lake last Spring and these few days with the Irish.  In both instances, they got it!  Rather than preaching apologetics to undo the mainstream, ‘Mother Earth News’ regard for all things alternative, there’s an energy with these folks and you can feel it spooling up — a zeal that believes we can make better choices and that it’s going to take a lot more than conventional opposition/fear to stop this conviction from coming to bear. 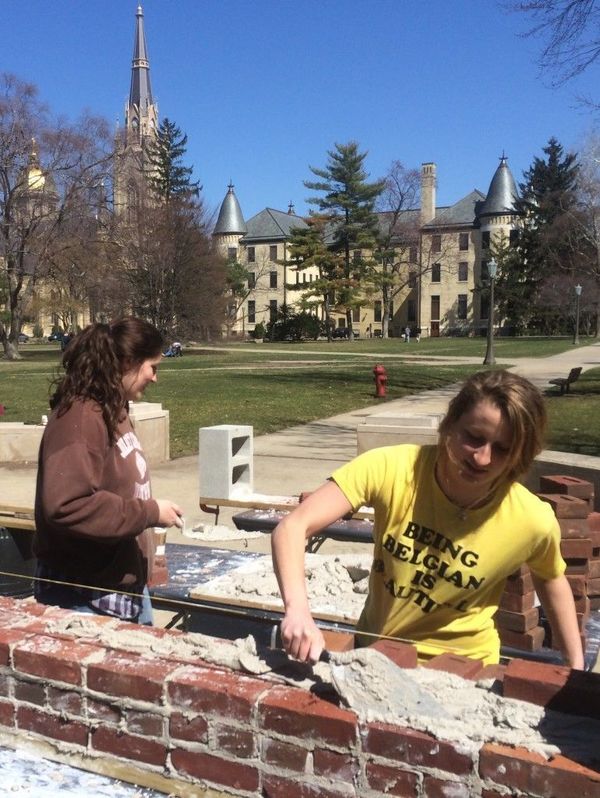 The following day, we were scheduled to have a 2 to 3 hour mass wall workshop in front of Bond Hall.  We put trowels in the hands of more than 30 students and the event ended up lasting some 6 hours.  Students and faculty alike participated in building triple wythe, common bond mass walls in the same fashion implemented by HFA.  It’s difficult to express the satisfaction of seeing these young people, who’d never handled trowels before, interacting with the process and building effective structural walls.  ’They’re doing it!’ I kept saying to myself. ‘They’re really doing it!’

I found particular kinship with professors Douglas Duany, Lucien Steil and Alan DeFrees.  When I consider the role these men have played in these gifted student’s lives, their support and active participation in both the lecture and workshop is telling.Chance would have it that a dear friend of mine lives within an hour or so of the school.  Fred Nowicki, a 40 year mason from the Chicago area, has been  instrumental to HFA.  As a Master Mason, Historian, Vietnam Vet, the list goes on,…  Nowicki is truly singular and brings to the table a level of knowledge, wisdom and generosity rarely found in one person.  I asked Fred to participate in the workshop, which he whole heartedly agreed to do, and the day’s success depended on his contribution.

Many thanks to Rose Brick for providing us with materials and delivering these to campus, and, as always, thank you Bryan Light of the Brick Industry Association, for donating a significant number of tools for the occasion.