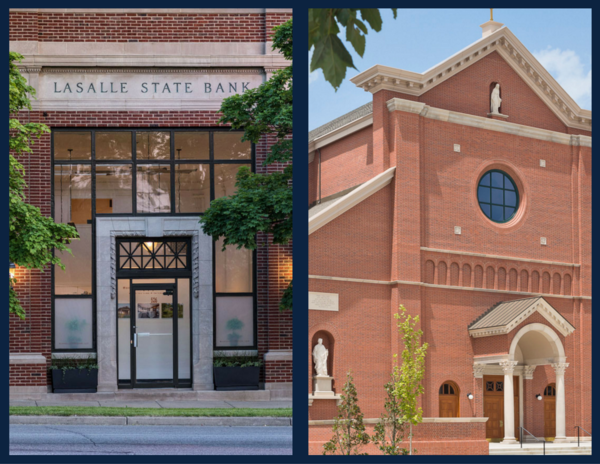 Assistant Professor Aimee Buccellato’s firm, Buccellato Design, won in the Preservation & Restoration category for the LaSalle State Bank Building.  Professor Buccellato spoke about the motivation behind this restoration project in the South Bend Tribune, "We understand the relationship between people and the built environment. We try to create spaces where people can live and work and play, and live the good life...We certainly feel we've created a space that does that."  Buccellato Design also recently won a Southhold Preservation Award for the same project.

Professor Duncan Stroik was recognized in the Architecture category for his work on the Saint Paul the Apostle Church.  The church is located in Spartanburg, South Carolina and is modeled on the broad tradition of Catholic architecture in the United States.  In a recent article Traditional Building magazine, Stroik described the project, “This is a large church that seats 800. It’s an essay in how to create beauty on a budget...And it’s a dream come true for a parish that had been meeting in a gym for 20 years.”

The Acanthus Awards also honor exemplary student work in classical or traditional design from current students and recent graduates.  School of Architecture alumnus Christopher C. Miller, M. Arch ‘14, received recognition for his thesis project, Market Bridge for Bath:  Fitting Type to Local Character—Professor Richard Economakis was the thesis advisor.  Miller developed a plan for a mixed use neighborhood development in the area surrounding River Avon in the historic city of Bath in England.

The ICAA is a non-profit organization that champions classical architecture and urbanism.   Based in New York City with chapters around the United States, the organization hosts classes, travel programs, lectures and conferences.  The Acanthus Awards are presented by the ICAA Chicago chapter annually.  Awards go to those practicing in the midwest region and to projects completed after 2007.