Samir Younés, associate professor of architecture, has edited a new book, Architects and Mimetic Rivalry, a series of essays by René Girard, professor emeritus at Stanford University; Léon Krier, architect, urbanist, and 2003 Driehaus Prize laureate; Kent Bloomer, adjunct professor of architecture at Yale University, and Younés. They argue that architectural identities are shaped by imitating preferred architectural forms—and by imitating the identities of their creators. The term “mimetic rivalry,” coined by Girard, occurs as a result of competition for what is commonly shared and desired. Architects often dismiss the idea, explaining their rivalry as a result of personal and ideological differences, unaware that the desire to imitate a master becomes the desire to obtain the same forms, the same status. For the first time in architectural literature, Architects and Mimetic Rivalry introduces and explains mimetic rivalry, and discusses the effects of this broad and unrecognized phenomenon on architects and architecture of today. 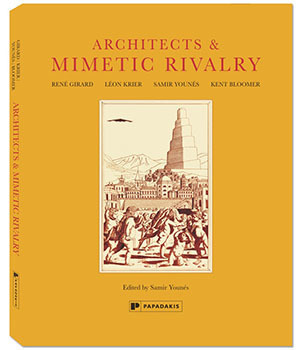