The competition involved concept designs for the redevelopment of a mill building in Palmer; a historic town center in Southampton; and a commercial site in Hadley.

Hosted by the Valley Development Council in collaboration with the Pioneer Valley Planning Commission and the Western Massachusetts Chapter of the American Institute of Architects, the competition sought visions for sustainable development and redevelopment and models for smart growth. 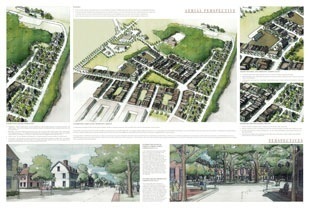