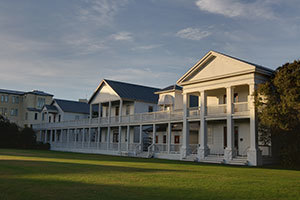 Affirming its status as the paramount institution for the study of traditional and classical architecture and urbanism, the University of Notre Dame has acquired the Seaside Archives. The collection, secured by the University’s School of Architecture in cooperation with the Hesburgh Libraries and Seaside founder and developer Robert Davis, details the history, planning, design and building of the first New Urbanist development.

“I am pleased that Seaside’s archives have found a supportive home in the library of the Notre Dame School of Architecture, and I know they will do an admirable job of organizing them and making them available to scholars and to those who might want to learn from our experiences in founding Seaside,” said Davis, who is a juror for the Richard H. Driehaus Prize at the University of Notre Dame.

Michael Lykoudis, Francis and Kathleen Rooney Dean of the School of Architecture, stated, “The Seaside Archives are an essential component of the school’s efforts to acquire teaching and research tools from antiquity to the present day. Seaside is not only a pedagogical and scholarly resource, but also a symbol of the return of modernity to traditional design principles for new cities and towns.”

Considered the birthplace of the New Urbanism movement, Seaside is an 80-acre holiday town in Florida’s panhandle. The development, which began construction in 1981, reintroduced the traditional neighborhood concept to the growing American suburban landscape. In response to sprawling neighborhoods that pulled people away from city centers and increased dependency on cars, Davis and his wife, Daryl Rose Davis, envisioned a development that would revive the lifestyle and qualities of the small town or city. Today, Seaside provides a walkable, mixed-use environment where residential, commercial and civic entities intermingle with the purpose of encouraging a more relational way of living.

The archives include aerial photographs of the community as well as a schematic history of its planning evolution and detailed work of some of its architects. The collection will join the Notre Dame Architecture Library’s body of related work, including the recently acquired Leon Krier Library and Archives. Krier, a renowned architect, theorist and urbanist, collaborated with Robert and Daryl Davis as well as acclaimed architects Andrés Duany and Elizabeth Plater-Zyberk on the Seaside plan. “The Seaside and Krier Archives together form a strong foundation that secures Notre Dame’s standing as a research destination devoted to the study of classical and traditional architecture and urbanism,” said Edward H. Arnold University Librarian Diane Parr Walker. 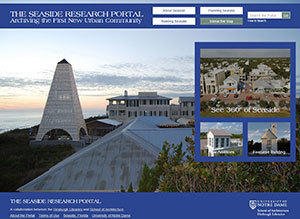 In conjunction with the acquisition, the Hesburgh Libraries, School of Architecture and town of Seaside have launched the newest phase of the Seaside Research Portal, the first virtual archive of a living community. The portal was created as an interactive tool for students and enthusiasts of urban design and architecture to study Seaside off location. Through the archive, individuals can direct their research from the urban scale down to the individual building scale.

Much of the written content on the portal, which includes a history of the founding and planning of Seaside as well as biographical information of some of its architects, is generated by Notre Dame architecture students. They also help design the site and are afforded the opportunity to see their work published beside that of the major architects who have worked on Seaside. The portal “is a way to promote our student work in addition to promoting our digital projects and the unique place that is Seaside,” said Architecture Librarian Jennifer Parker. The Seaside Research Portal has been recognized as a revolutionary innovation that merges traditional teaching and scholarship with emerging technologies for the study of the built environment.