Spanish architects Javier Cenicacelaya and Iñigo Saloña have been awarded the Rafael Manzano Martos Prize for Classical Architecture and Monument Restoration, presented in partnership by the University of Notre Dame School of Architecture and philanthropist Richard H. Driehaus.

The Manzano Prize, awarded Thursday (Oct. 23) in Madrid at the Museum of the Royal Academy of Fine Arts of San Fernando, recognizes Cenicacelaya and Saloña for their restoration projects, such as the restoration of the Palace of the Regional Government of Bizkaia, and new construction projects, including the School of the Holy Family, the rural center of La Rigada and a building on the historic street of Lacken in Brussels.
Michael Lykoudis, Francis and Kathleen Rooney Dean of the School of Architecture, stated “Javier Cenicacelaya’s and Iñigo Saloña’s work has been a lighthouse for many architects who longed for a way of building that expressed a reverence for a sense of place and dignity of local culture. Their work has since engaged tradition and modernity with sensitivity toward the critical issues of our time and an ardent optimism about the future.”
The Manzano Prize, established in 2012, rewards the work of architects who defend and preserve vernacular architecture and reinforce Spain’s unique architectural heritage. Architects of any nationality who have been professionally active in Spain for at least 10 years and whose work shares the vocabulary of the historic fabric of Spanish cities can apply for this prestigious award. 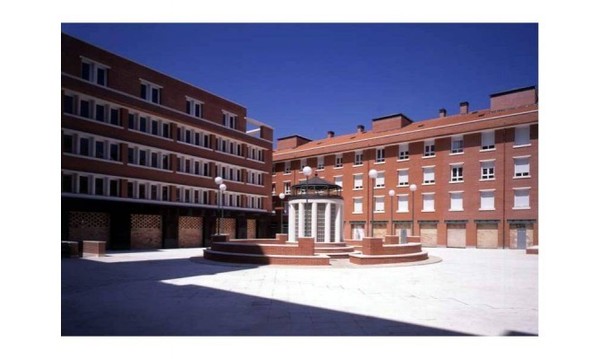 “Spanish architectural heritage is an important element of the genetic code of Spain and we have the obligation to preserve it, being faithful to the architectural tradition of each environment,” said Manzano.
The Manzano Prize is administered by the University of Notre Dame School of Architecture and supported by The Richard H. Driehaus Charitable Lead Trust. The Manzano Prize was established when Driehaus, named one of the 25 most influential investment managers of the 20th century by Barron’s magazine, met Manzano in Chicago when presenting the architect with the 2010 Richard H. Driehaus Prize at the University of Notre Dame, an international architecture prize that he sponsors to recognize traditional and classical architecture in contemporary society, and creates a positive cultural, environmental, and artistic impact.
“Our laureates remind us to embrace the lessons of the past and remain open to new applications in the present,” said Driehaus. “To create the new, we must have the old, for one cannot exist without the other.”
This year’s Manzano Prize laureates were selected by a jury composed of Michael Lykoudis, Ex-Officio Chair; Rafael Manzano Martos, 2010 Driehaus laureate; Léon Krier, inaugural Driehaus laureate; Leopoldo Gil Cornet, inaugural Manzano laureate; Melissa DelVecchio, partner with Robert A.M. Stern Architects; and Antonio Bonet Correa, president of the Royal Academy of Fine Arts of San Fernando.
Media contact: Jennifer Hoover, School of Architecture, 574-631-9033, jennifer.e.hoover.45@nd.edu