Administered by the Congress for the New Urbanism (CNU), the Charter Awards program rewards the best work of the new era of placemaking.  Annually since 2001, CNU has convened a jury of the highest caliber to review submissions and select winning entries that best embody and advance the principles of the Charter of the New Urbanism.  Two Notre Dame groups received Awards of Merit in the student category at this year’s awards ceremony held in June in Buffalo, New York. 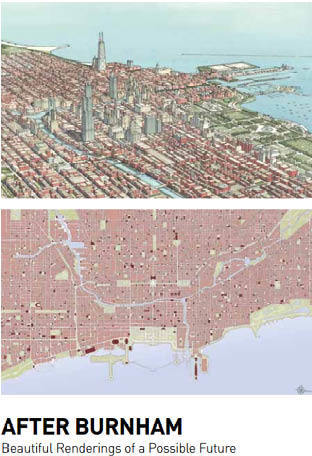 Professor Philip Bess, Professors John and Jennifer Griffin, Professor Douglas Duany, Will Dowdy and the 2011 and 2012 Urban Design studios won a Charter Award for their After Burnham project. After Burnham focuses on re-engaging Daniel H. Burnham’s 1909 Plan of Chicago as both a critique of present-day Chicago and as an authoritative reference point for a new visionary proposal for the city approximately 100 years into the future.

CNU - In these stunning renderings from the University of Notre Dame, you will likely recognize the City of Chicago. Or at least, the echoes of today’s Chicago, seen through the lens of a possible year 2109. Using Daniel Burnham’s Plan for Chicago from 1909 as inspiration, students envisioned “…an extended period of 21st century economic and population decline, followed by revival.” The revival period sees most of today’s contemporary skyscrapers replaced by 4-6 story midrises and major freeways have become parks. “As modern buildings throughout Chicago age and face restoration or replacement,” students explained, “Fiscal prudence and environmental sensibility will recall us to perennial architectural virtues of durability and beauty.”“Jurors were very impressed with the scope, complexity and ambitiousness of this plan,” said Brent Toderian, “Even as the details generated considerable discussion and debate!” In addition to the erasure of most of Chicago’s skyscrapers, the plan sees the reclamation of 70% of the suburban settlement for open land for agriculture, commercial forestry, passive wastewater treatment, forest preserves and prairie. And in a nod to Burnham, students have envisioned removing the Chicago Circle freeway interchange in order to build Burnham’s Civic Center on the original proposed site. “Call it a vision, a dream, or a lesson in civics,” said Jeff Speck, “This incredibly thoughtful, skillful, and refined proposal for the not-so-near future did not win the Regional Plan category – a category without a winner – because it could not be called a plan without a plausible implementation strategy for getting us to it from today’s reality. The problem with regional planning, as practiced in America at least, is that we lack the political mechanisms for making the proper decisions about our collective future. Until that changes, we will be stuck with unambitious regional plans and gorgeous impossible dreams, the latter of which could not be better personified than by this powerful proposal.”

For a full list of 2014 CNU recipients, please visit www.cnu.org. 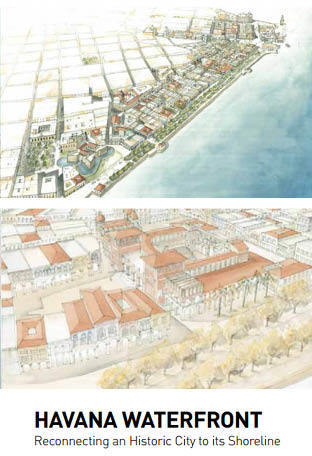 CNU - As part of an eight-week urban studio that involved a trip to Havana, fifth-year University of Notre Dame architecture students were tasked with repairing the city’s waterfront along the Avenida de Puerto. The Avenida is more than 135 meters wide, and the only building is an open-air theater. Students proposed a plan to extend the urban fabric to the edge of the channel while providing a four-lane boulevard and a broad walkway directly on the water’s edge. Rob Krier found much to admire in the students’ work. “The urban design conception, as well as the quality of the hand drawn plans were of such an exuberant quality, that it merits an outstanding award to the students as well as to the teachers,” he wrote. “With this project the city of Havana would become a real waterfront comparable to the famous Promenade des Anglais in Nice or the bay of San Sebastian – and with even better architecture.” The proposal envisions the creation of a new plaza around the currently existing statue of Maximiliano Gómez, which now stands in the middle of a roundabout. Each block contains a variety of buildings ranging from two- or three-bay houses to larger buildings. A new courthouse, performance hall, maritime museum, market hall, church, and stock exchange are all part of the plan. Most ground floors are dedicated to commercial activities, while upper levels serve more private purposes. “The individual projects exhibit a high level of skill in bringing traditional designs to a modern program and in representation renderings,” expressed Elizabeth Plater-Zyberk. “While the jury questioned the advisability of infilling open space, accepting the premise undertaken by the faculty guiding the project, we thought it appropriate to recognize the excellent execution of the master plan and the individual projects.”

For a full list of 2014 CNU recipients, please visit www.cnu.org.