Since the construction of Interstate 95, a north-south corridor intended to facilitate efficient transportation through the city that instead created a physical barrier between the heart of Philadelphia and the waterfront, the area has suffered from reduced land values, lack of pedestrian activity and a separation from the city center. The SNU members’ proposal included replacing I-95 with a series of boulevards, establishing neighborhood-scaled development patterns, reinvigorating the waterfront, moving the corridor back into the central area of the city and its historic and economic areas, and extending the city’s existing grid. 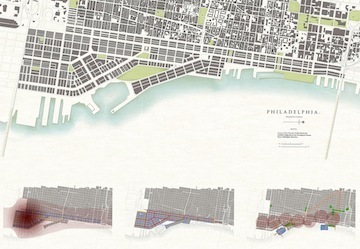 Fast-paced I-95 traffic would be transferred to this network of boulevards designed in accordance with the regulations of the Institute for Traffic Engineers’ “Designing Walkable Urban Thoroughfares,” that would also support automobile, bicycle, and pedestrian traffic and provide on-street parking on local side streets. Connecting these boulevards to the grid system of the city would reconnect the riverfront and create development opportunities for the walkable, mixed-use streets also proposed.

For the sixth consecutive year, the 2011 Ed Bacon Student Design Competition challenged students in all disciplines to focus on a real-world urban-design problem. In the spirit of the competition’s namesake, Edmund N. Bacon (head of Philadelphia's City Planning Commission from 1949-1970), the program focuses on encouraging multi-disciplinary, visionary ideas for our urban future. The theme for the 2011 competition was “What Happens When Transportation Corridors and Cities Collide?” When transportation corridors such as highways and rail lines meet dense urban areas, choices must be made about how to balance the needs of the transportation modes and the lively city it intersects. The Center for Architecture challenged the next generation of urban thinkers to propose solutions to integrate Philadelphia’s major transportation corridors into its urban fabric.

The Ed Bacon Student Design Competition also awarded an overall first place and prizes for infrastructure, landscape design, and sustainability to groups from the University of Toronto, Georgia Tech, and Temple University. The Notre Dame students will be honored alongside the other winners and 2011 Edmund N. Bacon Prize laureate Jeanette Sadik-Kahn, Commissioner of the New York Department of Transportation, at a February 1 award ceremony at the Philadelphia Center for Architecture.