“China has a rich building culture and an incredibly long architectural and urban history,” says Professor Selena Anders, who organized the three-week summer program. “After their Rome year, students have a visual and literal vocabulary in which to understand and address the world around them. Visiting China takes this understanding a step further.”  The program, which included Anders, six Notre Dame students---Matthew Cook, Jennifer Fitzpatrick, Maricruz Menchero, Carolina Mendy, Colin Patience, and Kaitlin Veenstra—and Professors Teofilo Victoria and Adib Cure, and four students from Miami, began in Shanghai, with stays in Nanjing, Pingyao, and Beijing. 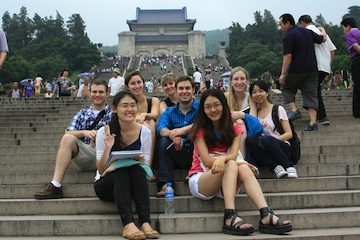 “We see classical Western models of architecture along the Bund (the historic financial center of Shanghai) and witness the beginning of a fusion of Western architectural models with traditional Chinese details,” Anders says. “Then cross to the Pudong district where architectural and urban conditions rival American city skylines. This contrast of tradition and modernity is something that is being lost quite rapidly in China.” One of the most surprising things is how similar, yet wholly different, Chinese architecture and urbanism is to the West, Anders says. Providing exterior public spaces such as squares and plazas is not part of planning the public realm. Ornamentation and civic art typically found in Western public spaces happen inside buildings.

Students in the program keep a sketchbook of urban and rural settings, public and private buildings, and details such as structural elements and ornaments. They then organize the elements in matrices so that the continuities and parallels overlay the distinctiveness and differences of the various cultures studied.  In addition they complete three watercolor plates to further explore in detail predominant Chinese architectural and urban types. “Hopefully,” Anders says, “this is a methodology they will find useful throughout their architectural careers.”