How can we recover a sense of the sacred in liturgy and architecture? Why was it lost in 20th century? What signs of hope exist for the future? Duncan Stroik examines these questions and more in his book, The Church Building as a Sacred Place: Beauty, Transcendence, and the Eternal, published by Liturgy Training Publications.

Stroik emphasizes the nature and purpose of the church building. He then considers how the Classical tradition can inform contemporary churches, analyzes the impact Modernist philosophy has had on architecture, and concludes by looking forward to renaissance and renewal. Along the way he offers principles of design, myths of contemporary sacred architecture, advice for priests, and explanations of the theology of Pope John Paul II and Pope Benedict XVI. Photographs and drawings of exemplary historic and contemporary churches are also included. 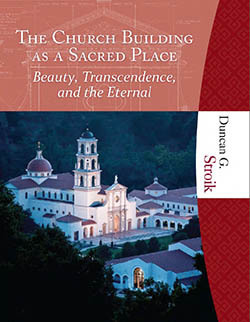 Stroik’s architectural career has helped lead the evolution of the international classical movement, and over the past decade his work has been instrumental in the renaissance of sacred architecture. Stroik and his work have been featured on PBS, A&E, and EWTN television. His design work and essays on architecture have been featured in New York Times, Wall Street Journal, New Republic, Crisis, Inside the Vatican, Our Sunday Visitor, and Catholic Dossier.  He is the founder and editor of the journal, Sacred Architecture. He lectures widely on the principles of traditional architecture and Catholic church design.

As principal of Duncan G. Stroik Architect, LLC, Stroik has earned a number of awards. Recent recognition has been given to the Shrine Church of Our Lady of Guadalupe in La Crosse, Wisconsin, said to be one of the first major Catholic churches built in a classical manner in over 50 years, and the restoration of Emmanuel Masqueray’s Cathedral of St. Joseph in Sioux Falls, South Dakota, which received an International Honor Award for Religious Architecture and was featured in the December 2012 issue of Traditional Building magazine.