Congratulations to Rodrigo Bollat Montenegro on having two of his projects selected by the Chicago-Midwest Chapter of the Institute of Classical Architecture & Art﻿ for the 2013 Acanthus Awards! These awards recognize and promote excellence in Classical and Vernacular design, focusing on achievement in Architecture, Interior Design, Preservation & Restoration, Landscape Design, the Allied Arts & Craftsmanship, Unbuilt Work, and Student Work. Rodrigo will receive two Student prizes at the Acanthus Awards presentation on November 16th, 2013, at the Elks National Memorial in Chicago. Featured below are Rodrigo's projects for Urban Planning and Design, and a Flemish Embassy in Rome. 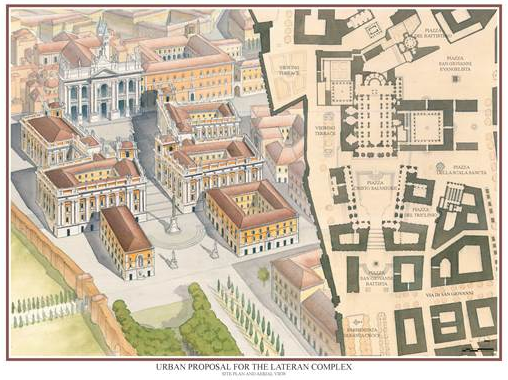 Project Description: As part of an effort to redo the “Roma Interrotta” Project from 1978, the professor asked his students to redesign Nolli’s Rome and use his maps to generate master plans. The general strategy was to extend the18th Century urban fabric of Rome. The streets of central Rome can be understood as a network of interconnected anchor points, such as fora, churches, monuments, pilgrimage sites, etc. These have taken their winding nature from trying to work their way around topography and existing streets and buildings, thus forming layers according to the era in which each intervention was done. This thousand-year old tradition of “layering” was used to determine the general structure of the proposed design. Also, part of the requirements of the project was to incorporate elements of the City Beautiful Movement, which was accomplished by converting Sixtus V’s straight streets into monumental-planted median boulevards, as well as integrating parks in the valleys. The San Giovanni in Laterano master plan consists of enclosing the public spaces surrounding it, allowing a sequence of piazze that interconnect the different parts of the complex. The main piazza (proposed Piazza Cristo Salvatore) evokes Michelangelo’s Campodoglio and brings it to a more monumental scale while still keeping the urban “feel” of Rome. The sequence of entry spaces from the East respond to the Cathedral’s baroque interior and increase the hierarchy of facades as you draw near to the church. An obelisk (the Sallustian Obelisk, which at one point was intended to be placed here) is proposed at the first piazza, marking the visual connection with Santa Croce’s tower. The plan allows for terraces to the south that would overlook the countryside.

Acanthus Award for a Flemish Embassy in Rome 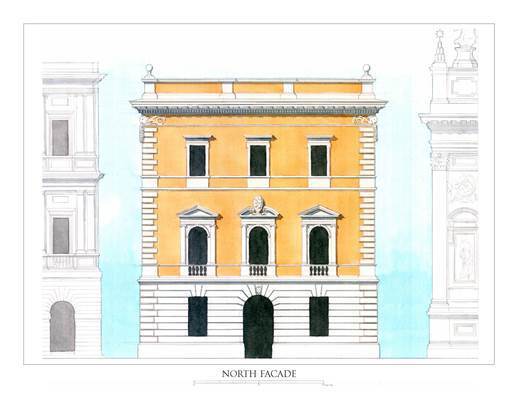 Project Description: In a hypothetical situation, Flanders separates from Wallonia, requesting an embassy in Rome that follows the typology of a Roman palazzo. Close to the Flemish Church on Via del Sudario, the site neighbors the imposing church of Sant’Andrea della Valle and faces one of central Rome’s main arteries: Corso Vittorio Emanuele II. Its plan is organized around a cortile which allows light and ventilation in this tight site. Services occupy the narrow sides while the most prominent rooms face the north and south end of the building. The lion, symbol of the Flemish, is embedded in the architecture as the ornamental piece that gives it its character.