On Friday, September 3 the School of Architecture Library's Rare Book Room was dedicated to Jim Ryan ’65 in a special ceremony held in the library. The Ryan Rare Book Room (RBBR) houses a significant collection of rare architectural books.

In the late 1990’s Thomas Gordon Smith, then chair of the School of Architecture, re-designed the Architecture Library and created the Rare Book Room. The Ryan Family Collection of the Park List was the first donation. The Ryan family then supported the acquisition of over 65 titles from the Helen Park list of architecture books, known to have been in the country prior to the American Revolution, the first architecture books published in the United States. 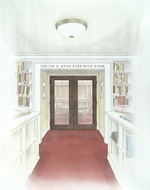 Since 1989 Jim served as CEO of Ryan Companies, a Minneapolis-based real-estate development company that his grandfather founded. Jim started his 44-year career with the company in the family lumberyard as an eighth-grader.

He also was a tireless philanthropist. In Minneapolis, Jim helped establish the Cristo Rey Jesuit High School and the Colin Powell Youth Leadership Center. He served as chairman of the board for Children's Hospitals and Clinics of Minnesota, leading a $300-million fundraising campaign, and for the Minnesota Nonprofits Assistance Funds.

"Jim's goal was not to build the biggest buildings or be the largest company," his cousin Pat Ryan said. "His goal was to build character in his employees, build confidence in our customers and to build better communities."

In addition to Colleen, his wife of 37 years, Jim is survived by children Molly Carson, Maggie Allen and Kate Hegman; Tim, Nell, Dan, Sean and Tess Ryan and six grandchildren.

The image to the right is of a painting completed by Brian Droste ND '10.