In spring 2011 the first-year Path C graduate design studio led by Prof. Richard Economakis focused on the architectural past and future of Bath, England. Students assessed the contemporary architectural needs of the area along with the history of the region's urban development. The studio was a continuation of the summer 2009 studio which outlined a master plan for Bath’s Western Riverside area. That project, which addressed the traditional urban patterns, building forms and constructional techniques, received a 2010 Academic Award of Excellence from the Congress for the New Urbanism (CNU).

Students developed a master plan for the improvement of a blighted area within Bath's historic center in the Kingsmead and Green Park areas to the west of the medieval Abbey. They examined Bath’s history and evolution, especially its medieval core and the outlying 18th-century regions. Emphasis was placed on the current debate regarding the nature of interventions in historic areas, which some believe ought to be distinguished from the existing urban fabric through “contemporary” expressions and planning strategies. 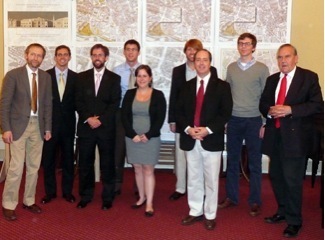 Recent proposals around Bath have faced public opposition because they have been viewed as incapable of harmonizing with the city’s well-preserved fabric of classical and traditional buildings. The students proposed to uphold the existing traditional patterns that have made the city a World Heritage site.

In March 2011 the studio also hosted an interdisciplinary colloquium “Modernity, Social Change and Tradition in Historic Bath,” which was held at the School and organized by Prof. Economakis with the assistance of a grant from Notre Dame’s Nanovic Institute. This event brought together a number of British experts on architecture and urbanism including Caroline Kay, the chief executive of the Bath Preservation Trust; Stephen Green, principal of Future Heritage Group, a Bath company specializing in the restoration of historic buildings; and Jim Warren, representative of the local citizen’s group Bath Heritage Watchdog.

The final work from the semester was presented in three sessions at Bath in May 2011. The visit concluded with a public exhibit of the work in the Building of Bath Museum, also made possible by grants from the Nanovic Institute.