The University of Notre Dame has received a $27 million gift from a Chicago area couple that will help fund a new School of Architecture building and expansion of that school’s academic programs.

The gift is from Matthew and Joyce Walsh (pictured right), of Burr Ridge, Ill., and the new building will be named in their honor. 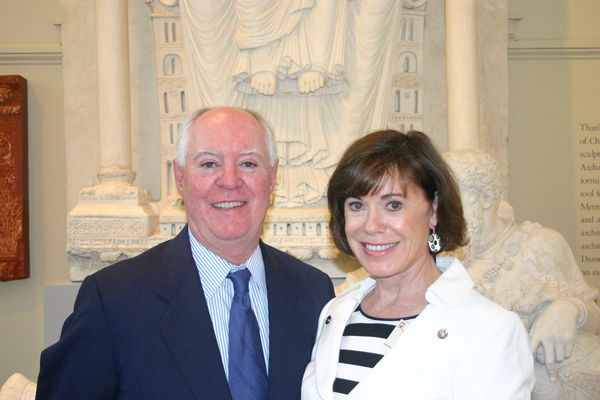 The 60,000-square-foot Walsh Family Hall of Architecture is expected to be built on the south edge of campus, east of the DeBartolo Performing Arts Center and south of Legends restaurant. The land currently is a visitors parking lot. A timeline for construction hasn’t yet been set.

The Walsh gift is the fifth largest in Notre Dame’s history among benefactions that have included a publicly announced figure.

“This is a real watershed for the school,” School of Architecture Dean Michael Lykoudis said Thursday. “A new building will help us by bringing us closer to the community.” The new facility also will allow the school to expand its teaching and research, he said.

The School of Architecture currently serves 200 to 250 undergraduates and 50 graduate students. The gift will help the school in its plan to add two new graduate programs, in historic preservation and real estate development, the dean said. Enrollment is likely to grow as a result, he said.

School of Architecture students and faculty have been involved in some presentations and design charrettes in the South Bend area, and Lykoudis said the gift will help to expand those connections with the community. “We want to build a culture of people educated about the built environment,” he said. That means not just training future architects, but also helping to develop knowledgeable business people and community residents, he said.

Matthew and Joyce Walsh have served on the School of Architecture advisory council since 1997 and Matthew Walsh has been chair of that council since 2004.

Notre Dame’s School of Architecture is known for its emphasis on the study of classical architecture and traditional urbanism. Notre Dame was the first Catholic university in the United States to offer a degree in architecture, beginning in 1898.

The School of Architecture currently is housed in Bond Hall, a 1917 building that originally served as the campus library. The Notre Dame Marching Band performs its pre-game concerts on the front steps of Bond Hall on home football game Saturdays.

A new use is expected to be found for Bond Hall after the architecture school vacates it.

“In order for the School of Architecture to move to the next level, we needed to have a state-of-the art facility,” Matthew Walsh said Thursday in a telephone interview.

Walsh earned a bachelor’s degree in English from Notre Dame in 1968. He lived in Morrissey Hall for the last three years of his undergraduate education, and said he made strong friendships during his Notre Dame years that have continued throughout his life.

Walsh said the university and its leaders have done a phenomenal job of developing Notre Dame and maintaining the collegiate gothic style across its built environment.

“Matt and Joyce have been tremendous leaders and generous supporters of architecture at Notre Dame, including a gift for the renovation of our new facility in Rome and chairing our advisory council,” said the Rev. John I. Jenkins, Notre Dame’s president. “This gift is simply transformative in nature. It will allow the university to take what already is a remarkable architecture school and make it among the very best in the world. We are grateful beyond words.”

Matthew Walsh and his brother Daniel are co-chairmen of Walsh Construction. The company was founded by their grandfather, Matthew Myles Walsh, in 1898.

After earning his law degree, Matthew Walsh joined his family’s business, which remains privately held. The firm has been involved in a wide range of projects both in the Chicago area and across the country. It is the 15th largest contractor in the nation and employs more than 5,000 engineers and skilled tradesmen.

Walsh Group won contracts for construction of Millennium Park in downtown Chicago and the expansion of Chicago’s O’Hare International Airport, among others, from the City of Chicago, according to Forbes.com.

The group manages projects ranging from a $1.1 billion expansion of the Los Angeles International Airport to a $763 million toll bridge near Louisville, Ky., Crain’s Chicago Business reported early this year.