Architects, artists, and historians from around the world gathered in 2008 to celebrate the 500th birthday of Renaissance architect Andrea Palladio. The new book, New Palladians, published by ArtMedia and co-edited by visiting professor Lucien Steil and Alireza Sagharchi, honors the tradition set forth by Palladio, and through the work of noted 21st- century classicists, celebrates that modern classical and vernacular architecture are flourishing and evolving, and shows commitment to ecological building and sustainable urbanism. 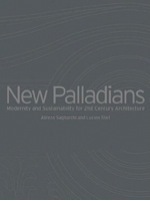 “Andrea Palladio’s work exemplifies the contextual adaptability of the principles of classical architecture and urbanism for town and countryside,” Steil writes. Sagharchi writes, “New Palladians recognize environmental stewardship as their greatest architectural challenge in the 21st century and are dedicated to the paradigm of a modernity that infuses sustainability with tradition, design, and craftsmanship.” A reception and book signing will be held on Tuesday, October 26, following the keynote address by architect John Simpson opening the “Durability in Construction” colloquium.