A series of brain-storming sessions staged throughout last week by a visiting group of architecture grad students from the University of Notre Dame considered various development scenarios for three sites stretching from the historic Holy Rosary Institute on Lafayette’s north side to the downtown area to the new Our Lady of Lourdes campus on the city’s south side. 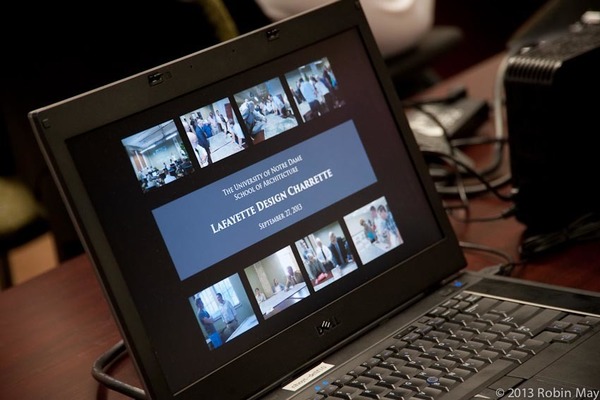 The group of Louisiana first-timers arrived Monday and included seven grad students led by Jennifer Griffin and John Griffin, husband/wife and both professors with Notre Dame’s School of Architecture.

The trip south, says Jennifer Griffin, who spoke with ABiz during the group’s final presentation Downtown Friday at The Switch, resulted from a meeting with Lafayette Downtown Development Authority CEO Nathan Norris at a conference of the Congress for the New Urbanism in Salt Lake City, Utah.

“Nathan told us about Lafayette, and we wanted to get our students engaged with a community so they’re not just isolated to learning in a classroom,” says Griffin. “Nathan told us how great a community Lafayette is and about Cajun culture, which we’d never been exposed to before. And in our short time here we have really been shown an incredible amount of hospitality."

Explaining the project, Griffin says the students identified three sites — Holy Rosary, Downtown and OLOL — and immediately got to work at the start of last week hearing the future development desires of each location’s stakeholders and community members.

At OLOL, the students came up with development options for a large undeveloped slice of green space at the hospital's new south side campus, says OLOL Community Relations Director Elisabeth Arnold. 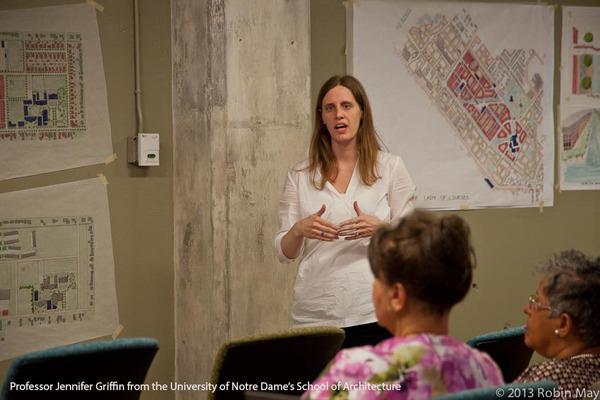 “They selected the big field next to our hospital, and their designs showed us how to divert traffic off Kaliste Saloom, and possibilities for building neighborhoods to feed commercial development in the area,” explains Arnold. “For each of the three sites, they’re showing how that space can be used differently and how to make the best use of these spaces in terms of long-term growth.”

For Lafayette’s Downtown, says Griffin, the students focused their brainstorming on increasing the area’s livability with more homes, office spaces, retail outlets and a grocery store. “We learned about all the great events held Downtown here, so the students came up with options for bringing more housing Downtown and for making it a more conducive place to live."

And on the city's north side, at Holy Rosary, the ideas centered on reconstituting the derelict campus, where the former all-black Catholic school’s main building has become more and more in jeopardy of crumbling into rubble.

“We toured each site, talked with the stakeholders and community members in those areas, and then held meetings throughout the week,” says Griffin.

On Wednesday, the group kicked off its series of design Charrettes at The Switch, concluding with Friday’s final presentation. 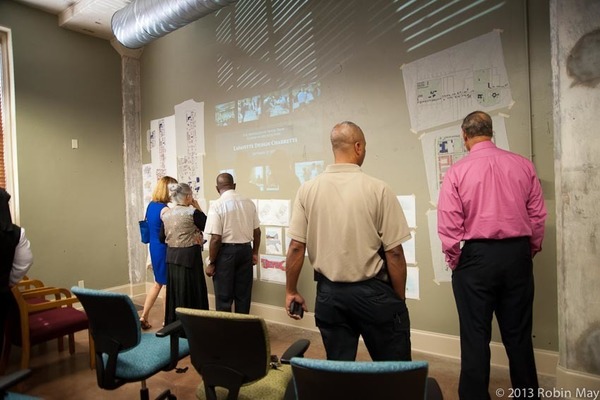 Glancing over the walls and tables inside The Switch on Friday afternoon, all filled with a week's worth of colorful sketches depicting the development possibilities for each of the three locations selected for the project, Griffin explains the process: "We toured each site, talked with the stakeholders and community members in those areas, and then held meetings throughout the week to get their ideas. The students then turned those ideas from the community into graphic representations, with a number of options for how each site could be developed.”

Read the next issue of ABiz, out on newsstands Oct. 15, for more on what the students think the future could hold for these three sites.