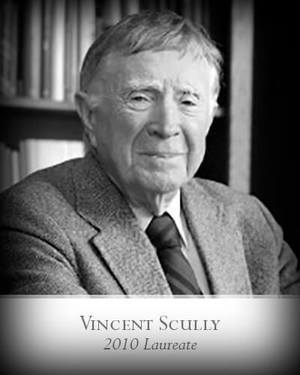 The 2010 Henry Hope Reed Award laureate, Vincent J. Scully, a celebrated architectural historian and inspirational leader of the preservationist movement, died on Thursday, November 30, 2017 at age 97 at his home in Lynchburg, Virginia.

“Dr. Scully saw that there is more to architecture than pure design. He believed architecture had the power to both diminish and to improve quality of life and eloquently argued that architects have a responsibility to ensure their designs provide beautiful and humane environments for strong communities to flourish,” said Michael Lykoudis, Francis and Kathleen Rooney Dean of the University of Notre Dame School of Architecture. “Our heartfelt sympathies go out to his family, friends, and legions of former students.”

“Vincent Scully was first and foremost an educator. During his long career at Yale he was an inspiration to generations of students and reached millions of additional people through his prolific writings and public lectures,” stated Richard H. Driehaus, patron of the Henry Hope Reed Award. “Rarely has a single individual had such an outsized impact on a field of study, and while his influence will continue to impact the discourse, his clarity of thought and unending activism on behalf of issues he held dear will be greatly missed.”

Scully grew up in New Haven, Connecticut, finding inspiration for his life’s work in the city of his youth. He enrolled at Yale at age 16 and received a BA in 1940. After serving as a Marine in World War II, Scully returned to Yale, earning a PhD in 1949, and spending his academic career as one of the University’s most beloved lecturers.