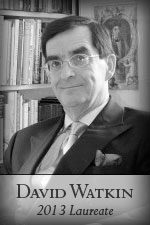 “David Watkin saw what many others do not - architectural history provides a window into understanding the present and creating a more vibrant future. A great defender of the traditional city, he truly believed in the ability of classical architecture to address contemporary challenges,” said Michael Lykoudis, Francis and Kathleen Rooney Dean of the University of Notre Dame School of Architecture. “Our heartfelt sympathies go out to his friends, colleagues and the students he taught over the course of his long career.”

“David was a tireless advocate for classicism.  While his leadership will be missed, his influence will live on through his prolific scholarship,” stated Richard H. Driehaus, patron of the Henry Hope Reed Award.

Watkin was emeritus professor of History of Architecture and emeritus fellow of Peterhouse, University of Cambridge where he taught from 1970-2008. His research focused on classical architecture with an emphasis on the neoclassical from the 18th century to the present. The author of over thirty books, Watkin first received international attention with his book Morality and Architecture: The Development of a Theme in Architectural History and Theory from the Gothic Revival to the Modern Movement (1977), which he expanded and republished under the title Morality and Architecture Revisited (2001).