In the late 19th and early 20th centuries, cast-plaster fragments of classical and historical buildings were collected so working-class people and students who couldn’t afford to travel would be able to be able to see some of the world's greatest art and architectural masterpieces. Many American institutions, including the Metropolitan Museum of Art in New York, created their own cast-plaster collections. In 2005, the Met’s collection was dispersed to a handful of academic institutions, including the University of Notre Dame School of Architecture who acquired 30 architectural and sculptural casts. Some of the casts are now on permanent display in the Bond Hall Gallery thanks to the generous support of advisory council members Matthew and Joyce Walsh.

They are shown here via Gigapan technology which allows one to zoom in to see the collection in great detail. These casts represent architectural and artistic masterpieces of the Classical world through the Renaissance. Visitors from all over the world once visited the Met’s Great Hall to study and draw from the collection. Today, students, faculty, and visitors to the University of Notre Dame School of Architecture do the same. 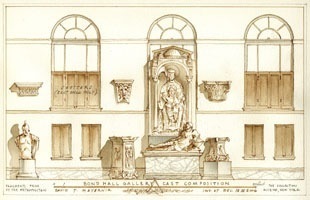 The focal point of the room is the Madonna-and-Child-cast taken from the Cathedral Notre Dame de Paris. It was carefully restored by New York-based restorationist and sculptor Treese Robb. It took Ms. Robb five weeks to clean and repair the cast, which stands nine feet high and four feet wide. The cast is now permanently featured in front of the east windows in the School's gallery.

When the cast arrived at Notre Dame "the plaster was sugary and brittle after suffering years of weather and animal damage," Ms. Robb says. "Columns were missing; the right side was in five pieces."

With the assistance of Robert Brandt, who directs the School's furniture-design concentration, Ms. Robb added a new column (it is bass wood covered in white textured paint), inserted steel pins and burlap "bandages" to add support, and new plaster on the façade to restore the look of the sculpture itself. She finished the piece with a light coat to white paint, a reference to hand-carved French limestone.

The cast was made in 1875 from Notre Dame's west portal. The piece is highly valued due to the fact that it was made before the 19th-century renovation of the cathedral when the original sculpture was updated.