Fourth-year student Carl Silliman's interest in humanitarian work springs from his engineering professor father’s work on groundwater projects in Haiti and Benin, West Africa. This summer, Silliman undertook his own humanitarian effort in India and Nepal with UNESCO's Laura W. Bush Traveling Fellowship Grant that he received for the proposal “Designing a Proper Home for Displaced Refugees." 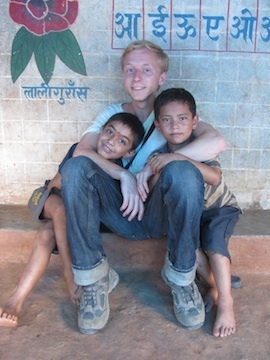 Prof. Douglas Duany, who has been a sounding board for Silliman about the project, has made multiple visits to similar refugee camps and accompanied Silliman as a guide for most of his seven-week project. He researched successful urban designs that revolved around walkability and examples of traditional Tibetan architecture. He also “hunted down” hidden Tibetan monasteries in the Himalayas, served at an orphanage in Pokhara, Nepal, documenting the urban centers of Kathmandu, Patan, and Bhaktapur, and collected data from the refugee camp in Mainpat, near Varanasi in India. “Most buildings are built as economically and temporary as possible, but the general disposition of Tibetan refugees is hardly temporary,” Silliman says. “The inhabitants of Mainpat have been displaced for nearly 50 years.”

Silliman’s cultural immersion included staying at the orphanages Hope House and Namaste Children's House, both in Pokhara, Nepal, various monasteries in the Himalayas, and at Mainpat. He continues his research and designs, submitting a report describing his experiences and analyzing the objectives he achieved to UNESCO. He is also using his findings and designs as the basis for his terminal design project in Spring 2013. And he doesn’t plan to stop there.

“If all goes well, I plan to apply for a Fulbright to continue this research after my undergrad,” he says. “And with the contacts I will make through this experience (both through India and UNESCO) I am fairly optimistic looking ahead.”