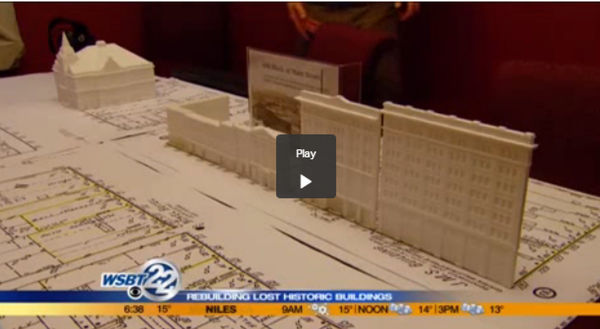 Historic South Bend buildings, demolished decades ago, are getting new life and being recreated in miniature versions.

The project is a collaboration between Notre Dame's Architectural Library, the Historic preservation Commission and the History Museum. The idea is to give people a glimpse of what the city looked like in the 20s and 30s -- before the years of Urban Renewal in the 60s and 70s when many historic buildings were torn down. The entire thing will be on display in May for South Bend's 150th celebration.

There is a parking lot along Main Street in downtown South Bend -- its is right behind the Morris Performing Arts Center. That parking lot used to be something beautiful: South Bend's City Hall.

The building would have sat near the corner of Colfax and Main. It was built in the 1900s on land donated by the Oliver family but it was torn down in the late 70s.

"Gorgeous isn't it," says Adam Heet as he holds us a miniature version of the old City Hall. Heet is the Digital Projects Specialist at the Notre Dame Architecture Library.

Now, thanks to a project taking shape at the Architectural Library, the old city hall and other lost downtown South Bend buildings are getting new life.

"One of the goals of this project is not only to understand the history and to see what we lost but to really look at -- give people options and models to do more sympathetic design moving forward," says Jennifer Parker, Architecture Librarian.

Students at faculty are using old photographs, blueprints, maps and other data. They put that in a computer to meticulously "build" the buildings that used to sit along Main Street between LaSalle and Washington. Then they send that information to a 3-D printing where a model is made.

"It's been going for 22 hours and we have 29 hours left on this one and we will have another city hall," says Heet as he shows us the 3-D printer in action.

The process has taken 4 years so far. And by May, the team will have recreated about 40 buildings including a row of shops and the Oliver Opera House which used to sit along side the JMS building. The hope is, while many of these old buildings may be long gone, they won't be forgotten.

"I think the important for understanding the history of South Bend leads to building a better South Bend in the future," says Parker.

The project also includes a website that will show all the historic neighborhoods of South Bend, a mobile app for the iPad with old photos and maps, and a virtual tour that can put viewers in a virtual animation state so they can actually explore the streets of downtown. It debuts at South Bend's 150 celebration in May.