Ensuring a more robust response has been a priority for emergency planners ever since, given predictions by scientists that such once-in-a-lifetime storms will become more common.

At a news conference on Tuesday, the city unveiled a long-awaited prototype for emergency housing structures. 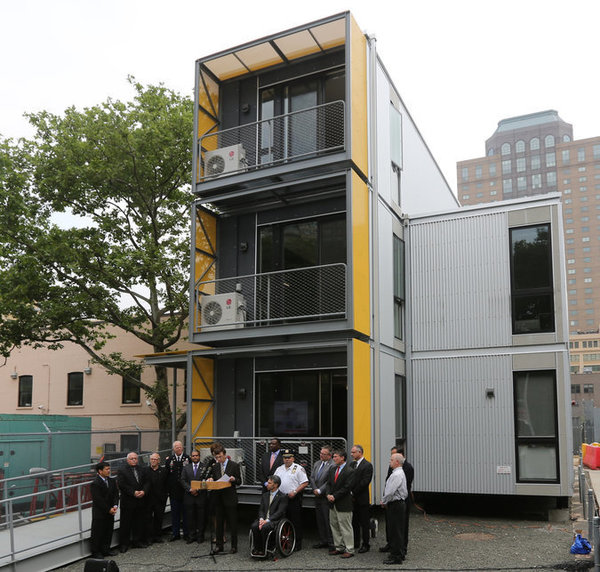 The three-story unit, consisting of three apartments stacked on top of one another, was erected at a parking lot at Cadman Plaza East in northern Downtown Brooklyn. The cork floors and spartan bathrooms give the models an institutional feel more reminiscent of a college dormitory than neighboring Dumbo. But with full kitchens and a few bursts of yellow, the apartments in no way resemble the infamous Federal Emergency Management Agency trailers where dangerous levels of formaldehyde poisoned occupants after Hurricane Katrina, or the illegal basement apartments that offered refuge from Hurricane Sandy.

Joseph F. Bruno, the commissioner of the New York City Office of Emergency Management, which helped oversee the project, called the building a dramatic improvement to what the city could currently offer disaster victims. “You can really see a family sitting there, having a tough time, but also a nice, clean group environment,” he said.

But even Mr. Bruno acknowledged that the prototype was only a first step toward building more humane post-disaster housing. The design process demonstrates the challenges in balancing cost with comfort and stability in emergency shelters, especially as more people move to dense coastal cities.

The units range from a 480-square-foot one-bedroom to an 813-square-foot three-bedroom. Each cost $350,000 to $400,000 to build, Mr. Bruno said, figures that the city hopes would be cut in half in mass production. It took seven flatbed trucks to carry the structure in pieces from a factory in Indiana.

Still, that sum fails to account for the land costs associated with finding sites for the emergency shelters, said Jesse M. Keenan, research director at the Center for Urban Real Estate at Columbia University. Because the buildings would be treated as permanent housing units, they would face a complex inspection and permit process before being approved, Mr. Keenan said.

“In a place like New York City which has very complex rules, the question is to what extent large scale applications of these things would be timely,” he said.

It took officials about a year to sort out permit issues for the prototype, said Cynthia Barton, housing recovery program manager for the Office of Emergency Management. The building still does not have a certificate of occupancy, though the city plans to have some staff members stay in the units for as many as five days at a time to help evaluate them.

Ms. Barton said that in the aftermath of a disaster, waivers would accelerate the permitting process. In a city with scant space for the trailers that came to define the government’s post-Katrina housing troubles, buildings like this can be assembled off-site and erected within days of a disaster, officials said, allowing families to stay in their neighborhoods.

In trying to create durable housing, officials say they are heeding another lesson of recent disasters: housing designed to be temporary could be used for years.

“The trick about what we call emergency housing is that it ends up being long-term,” said Marianne Cusato, the designer whose Katrina Cottage, often called the new Sears Roebuck house, became a coveted alternative to government trailers. More than 3,000 people remained in FEMA trailers four years after Hurricane Katrina.

Given the growing risk of extreme weather, Ms. Cusato said, it is worth investing in buildings that can last longer.

“The cheapest way of building is not worth rebuilding,” she said.