This spring the National Civic Art Society (NCAS) and the Institute for Classical Architecture & Classical America (ICACA) Mid-Atlantic Chapter invited classical architects and artists to engage in a competition to design a counterproposal to Frank Gehry's design of a national monument to President Dwight D. Eisenhower.

The blog, BeyondDC, praised the submissions from Notre Dame students and alumni saying "the two competition winners are both beautiful and would bring a touch of grace to Southwest’s harsh streets." 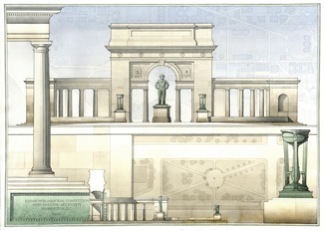 The competition sought designs of appropriate, meaningful, and timeless memorials to Dwight D. Eisenhower, 34th President of the United States, five-star general of the United States Army, Supreme Commander of the Allied forces in Europe and Supreme Commander of NATO, in harmony with the civic vision of the L'Enfant Plan as well as the McMillan Commission. The competition sparked dialogue among designers and the general public about the meaning, inspiration and dignity of designs suitable to commemorate a distinguished president and general while embodying the traditions of civic art in Washington, DC.