Architect and illustrator Gilbert Gorski will lecture on “Architecture in the Age of Digitalism” to mark the official opening of an exhibit of his work January 30 at 5 p.m. in the Bond Hall Auditorium. A reception will follow. Gorski's exhibit, “Paintings, Drawings, and Etchings,” runs from January 14 through February 8 in the Bond Hall Gallery.

“If work is to be relevant and meaningful for present as well as future generations, the media employed to transmit and project ideas cannot be excluded from the creation and production of those ideas,” says Gorski, the James A. and Louise F. Nolen Associate Professor of Architecture. “Today, nearly all ideas communicated on a widespread scale are digitized. Media not conveyed digitally is becoming irrelevant. To create entirely with traditional methods and tools ignores the present relationship between media and message.” 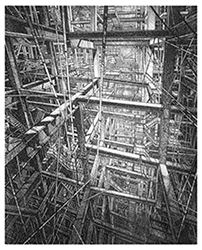 A licensed architect in the State of Illinois and a master of many art forms, Gorski has received international acclaim for his work. He has twice been awarded the Hugh Ferriss Memorial Prize from the American Society of Architectural Illustrators, as well as a National Collaborative Achievement Award from the American Institute of Architects. Along with Dr. James Packer, Gorski recently completed The Architecture of the Roman Forum, an illustrated compilation of the buildings and monuments of the Forum in the late fourth century.

Gorski has studied painting at the School of the Art Institute of Chicago and has maintained a parallel career as an artist, concentrating on the traditional techniques of drawing, printmaking, and painting. A noted illustrator, he specializes in watercolor and pencil, and has been acknowledged by peers and clients as one of the premier architectural illustrators practicing today.

“Painting’s relevance has been diminished by other art forms, yet I remain attracted to it for a number of reasons,” Gorski says. “First, I like working with my hands. Second, painting for me reaffirms the power of handmade objects—oil paintings in particular must be seen in person, they defy being captured with photography. Finally, I am interested in the poetry of common things; painting allows me to express the extraordinary I see in the ordinary."