Orginially published in the Fall 2013 edition of the Saint Ignatius Magazine by Gay Eyerman. 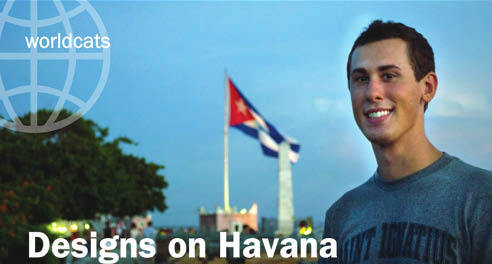 “Travel allows you to understand how lucky we are in the United States,” says Kellen Krause ’06. “We enjoy much more freedom than any other country.” For Krause, one of those freedoms was the ability to travel to Cuba in August of 2012 on a four-day journey with fellow University of Notre Dame graduate students in Architecture.

The purpose of the trip was both to experience colonial style European architecture and to design potential housing units for citizens. “The reason we go to Cuba is because it’s what our Dean calls the ‘Rome of the Americas’,” explains Krause. “It’s almost preserved from colonial times, from the early 1500s.” Students can see the character and design of European buildings without going to Europe.

“We designed apartment buildings called viviendas. The goal was to provide housing because Cuba doesn’t have enough housing for the people who live there.” The eight grad students individually created possible programs Havana could build – with plans, elevations, 3D drawings, technical details on how wall sections work, and materials. The work was presented to the city to show what is possible.

Krause acknowledges the challenges of working with the Cuban government. “This is a complicated problem. As an American, you look at something and have an opinion. You go to school, and you think of what could be better. In Cuba, people are interested in learning what they could be doing, but the actual building is nearly impossible with the way in which communist government works.”

“The most valuable thing I took away,” says Krause, “is an awareness of how the built environment affects our lives, to realize how the layout of a city impacts human flourishing.”

Krause credits Saint Ignatius High School with instilling essential values in him that serve as his foundation – professionally, as well as in everyday life. “I credit Saint Ignatius and the Catholic Church for teaching me to think critically, being able to not only analyze and have a spirited debate, but to really try to get at the root of a problem and do something about it.” He also praises Notre Dame for a focus beyond economic benefits of a career. “They really want to build architecture for the betterment of people, not just to make money. You learn that at Ignatius as well – how to care about your brothers and sisters and how to follow Christ.”

Krause earned his bachelor’s degree in Scenic Design from De Paul University, a decision influenced by Jon Jarc ’93, who was the theater department’s stage crew director when Krause was a student. With his master’s in Architecture, Krause hops to come home to Cleveland. “It’s staggering what we learn at Notre Dame that isn’t being applied throughout the country. You want something that lasts and that will contribute to the community and economy and is affordable. When I graduate, I want to be able to come home and solve some of the problems Cleveland is facing.”