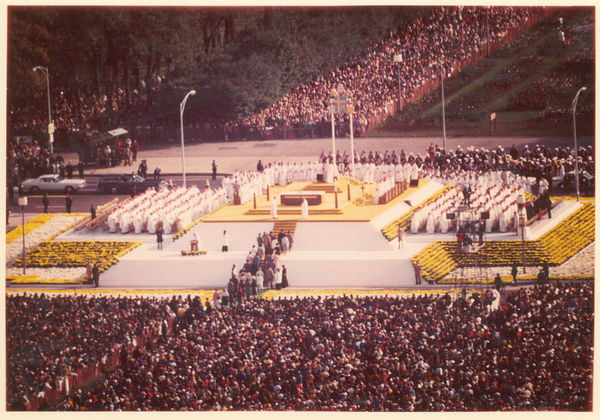 This summer, the Archdiocese of Philadelphia announced that James Lenahan, a recent graduate from the Notre Dame School of Architecture, had won its Papal Sanctuary Design Contest. Lenahan’s winning design would become the inspiration for the sanctuary area and furniture for the upcoming Papal Mass, concluding the Eighth World Meeting of Families on September 27, 2015. Lenahan isn’t the first graduate of the program to design for a pope, John Jay Fox III ‘73 designed the papal platform when Pope John Paul II visited Chicago thirty-six years ago.

In 1979, officials from the Catholic Archdiocese of Chicago reached out to Fox and Fox Architects, one of the city’s oldest architectural firms, for help designing the stage. The firm, well-known in Chicago for designing Catholic schools and churches, seemed like a natural fit for such an important project. 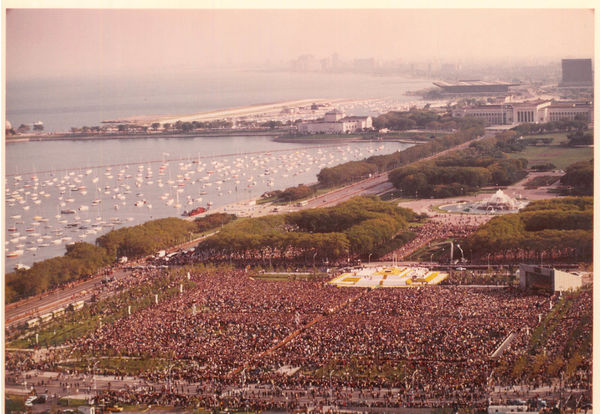 The papal platform was located on axis with the Buckingham Fountain, and was adjacent to the existing band shell where the choir performed.

Fox, who was 29 when he designed the Papal platform, said the whole process moved quickly. He started working on the design Labor Day weekend of 1979, and just five weeks later, the cross-shaped platform was built in Chicago’s front yard, visible from many of the high-rises along Michigan Avenue.

On October 5, 1979, more than one million worshipers gathered around Fox’s 15,000 square foot design. Surrounded by white and yellow mums, the tiered platform was constructed in such a way that everyone gathered in Grant Park had a view of the Pope, 12 cardinals, 375 bishops and 600 eucharistic ministers throughout the ceremony.

“Designing the platform for Pope John Paul II was one of the great honors of my life,” said Fox.  “I would like to congratulate Jim Lenahan on his achievement. He is an impressive young man as well as a talented architect. As a fellow Notre Dame graduate, I am proud of him and his dedication to our shared faith and profession. I am equally proud and grateful to the outstanding Notre Dame architecture program which has given so many of us the opportunity to learn and develop our skills and talents at the highest level and to absorb and study the great architecture of the world during our year in Rome."