Marty Sandberg’s ’11 lifelong love for the Chicago Cubs and passion for architecture took center stage when he launched a blog showcasing his ideas for the Triangle Building at Wrigley Field. He was featured in early September on Curbed Chicago: The Chicago Neighborhoods and Real Estate Blog.

The Triangle Building is Sandberg’s solution to the vacant, triangular lot west of the third-base grandstand. The Cubs promised to develop the lot in exchange for expanded bleacher seating. The Cubs aided Sandberg in the programming of the building and the site. The project was completed as Sandberg's fifth-year thesis project while he was a Notre Dame student. 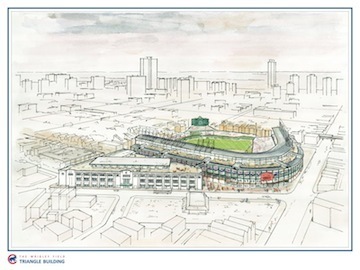 In his design, Sandberg calls for a Chicago Cubs Hall of Fame, a Pro Shop, new ticket windows, improved offices for Cubs management with a bridge to the stadium, sports medicine facility, and a terraced rooftop for fans. He notes that amenities such as the Hall of Fame, Triangle Atrium, and rooftop terrace could earn revenue year-round from fans and tourists alike, whether it be a visit to the historic ballpark’s neighborhood or to host a party on the roof or in the atrium.