Professor David Mayernik led five undergraduate architecture students in an eight-week design project for the Newberry Library. It was the first Chicago studio run in the School’s space in the Daniel Burnham-designed Railway Exchange Building (now known as the Motorola Building). 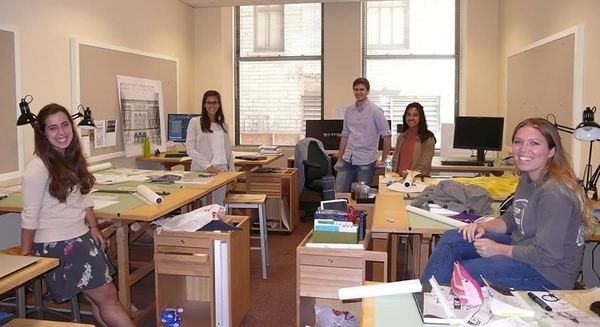 Prof. Mayernik’s studio focused on designing an extension for the Chicago-based Library’s neo-Romanesque building that would house the Renaissance music collection and create a dedicated performance space for the Newberry Consort. The Newberry Consort, a world-renowned early music ensemble, has long been affiliated with the Library; Mary Springfels founded the Consort to perform music in the collection.

During the first week of studio, which began on June 22, 2015, Prof. Mayernik and his students visited the Library and met with then-Director of the Center for Renaissance Studies and Curator of Music, Carla Zecher. The students were challenged to create an addition that connects with the Library’s existing spaces but is able to operate independently for after-hours use. Students were expected to demonstrate understanding of the grammar, syntax, rhetoric and poetics of classical Renaissance architecture. The second week included a visit from Ellen Hargis of the Newberry Consort, who described her balancing of research and creative performance.

During the semester the studio participants also traveled to the offices of HBRA where they met with Gary Ainge and Aric Lasher to learn about how their office approaches Design Development drawings. 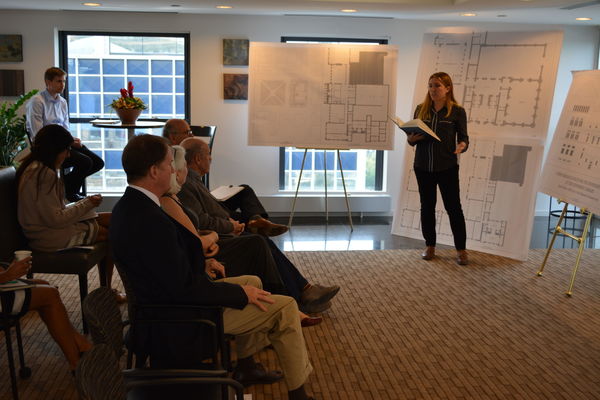 Kelsey Weber presents her project during the Chicago studio review on August 13, 2015.

The semester-long project integrated theories of music in the Renaissance with its architecture, while reinforcing how research informs modern cultural performance, and how performance serves as a metaphor for the design process. The final presentations included black and white CAD line drawings and wash renderings that stressed Design Development level of detail. On August 13th, the students presented their final designs to Dean Michael Lykoudis and guest critics Thomas Rajkovich, Stuart Cohen, and Ellen Hargis, in the penthouse of the Motorola Building, where Burnham designed the famous 1909 Chicago master plan.

The School is grateful for the assistance of the Newberry Consort as well as HBRA.