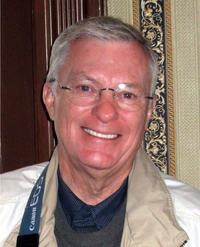 Join the School of Architecture for a conversation with Norm Newberry, a 1965 graduate of the program who has gone on to have a distinguished career in production design.

Norm Newberry was born and raised in Hollywood. He learned his trade as he was growing up from his father, Bill Newberry, who was first an Architect and eventually spent 40 years working in the film industry as an Art Director. Both Bill and Norm received a Bachelor of Architecture degree from the University of Notre Dame, Bill in 1934 and Norm in 1965.

Norm Newberry began his motion picture career in the mid-sixties as a Set Designer in one of the last of the large studio system art departments at Universal Studios.

After a stint as an officer in the Navy’s Seabees he rejoined the Universal Art Department as an Art Director in the early seventies. After designing many television series during Universal and Quinn Martin’s TV heydays, he moved on to Art Direct and Production Design dozens of Features. During a slow-down of film work in the late eighties, Norm found a home at Universal Creative and spent fourteen years as Executive Art Director and Design Director for all of Universal’s Studio Theme Parks and back lot set streets. He completed his fourteen years at Universal Creative as Vice President of Design for Universal Studios, Japan.

In 2002 Norm returned to the Motion Picture Industry, reinventing himself as a Motion Capture Art Director. He has worked on all the films to date that were entirely Motion Captured, from “Polar Express” to “Avatar”. He invented the term “Space Wrangler” used to describe production design in the virtual world and its relationship to real time performances.

Norm continues his active involvement in the ART DIRECTORS GUILD and the Designers Branch of the ACADEMY OF MOTION PICTURES ARTS AND SCIENCES.

In 2018 Norm received the “LIFE TIME ACHIEVEMENT AWARD” from the ART DIRECTORS GUILD.