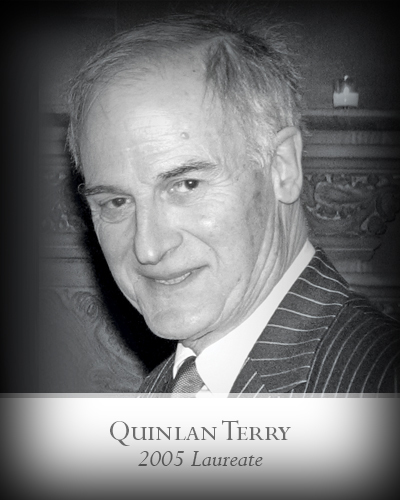 A leading figure in the revival of classical architecture, Quinlan Terry emphasizes traditional materials, construction methods, and symbolic ornament as valuable solutions for modern architecture. His preferred material choices are not made merely to evoke a historical appearance, but also to express the ethical integrity that characterizes his work. For every project, Mr. Terry demonstrates the financial viability of traditional construction and traditional forms of light and ventilation when considered through the life of the building. Mr. Terry's work has demonstrated that solutions for modern problems can be accomplished with traditional and classical designs. In a 1987 speech for the Oxford Union Debate, Mr. Terry said:

"We cannot think seriously of architecture without raising at the same time the fundamental question of man's life on earth . . . let us build smaller and gentler buildings; let us make walls of solid brick and stone; let us roof them with slates and pierce them with sash windows of the kind that have recommended themselves to generations of Englishmen; let us use the Doric, Ionic and Corinthian orders; and let us take inspiration from the wisdom of our forefathers, so that our buildings will be signs and heralds of a more natural, more stable and more beautiful world."

Mr. Terry's work includes the redesign of three State rooms at 10 Downing Street, Merchants Square at Colonial Williamsburg, and the Richmond Riverside Development in Surrey, a large development with offices, apartments, restaurants and community gardens which has become an icon of traditional urban design. Other projects include a series of villas in Regents Park, London and the new Brentwood Cathedral in Essex.

Mr. Terry is the principal of Quinlan and Francis Terry Architects. The practice extends the lineage of classical design firm Erith & Terry, which operated from 1968 to 2004. Upon graduation from London’s Architectural Association, Mr. Terry began working with Raymond Erith (1904–73), the most respected traditional designer in Britain at that time.

Mr. Terry was a Rome Scholar sponsored by The British School in Rome, which promotes education in architecture, fine art and history. In 1984 he received the European Prize from the Philippe Rotthier Foundation and in 2002 he was honored with the Arthur Ross Award from the Institute of Classical Architecture and Classical America. Mr. Terry’s library at Downing College, Cambridge, was named the “Building of the Year” by the Royal Institute of British Architects. A private residence he designed in Dorset was named “Best Modern Classical House” in 2003 by the Georgian Group.