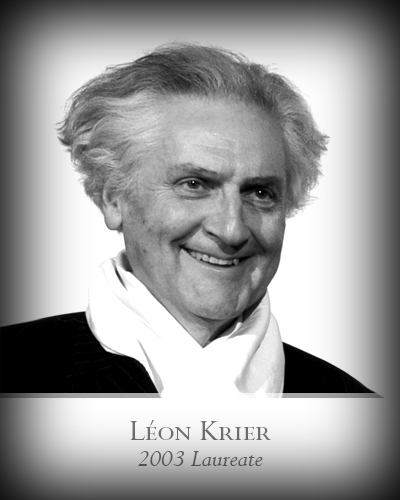 Best known as the architect of the Prince of Wales’s model town of Poundbury in Dorset, England and as the intellectual godfather of the New Urbanism movement in the U.S., Mr. Krier believes architecture should not be left to architects alone. He says the world is paying a high price for abandoning architecture to the whims of experts, forsaking a healthy urban effect through the creation of viable communities in favor of fleeting fashion. His views have inspired many notable people—architecture professionals and amateurs alike—to pursue a better built environment.

Noted architect and town planner Andres Duany experienced the transforming power of Mr. Krier’s ideas at a lecture that changed the course of his career. “Krier gave a powerful talk about traditional urbanism, and after a couple of weeks of real agony and crisis I realized I couldn’t go on designing these fashionable tall buildings, which were fascinating visually, but didn’t produce any healthy urban effect. They wouldn’t affect society in a positive way,” Mr. Duany says. “The prospect of instead creating traditional communities where our plans could actually make someone’s daily life better really excited me. Krier introduced me to the idea of looking at people first, and to the power of physical design to change the social life of a community.”

Mr. Krier has taught architecture and town planning at the Royal College of Arts, London; Princeton University; the University of Virginia and Yale University. He is a founding trustee of the New School for Traditional Architecture & Urbanism in Charleston, South Carolina. Mr. Krier’s honors include the Jefferson Memorial Gold Medal; the Berlin Prize for Architecture; the Chicago American Institute of Architects Award; the European Culture Prize and now the inaugural Richard H. Driehaus Prize for Classical Architecture.

The author of several books, Mr. Krier’s Architecture: Choice or Fate was awarded the Silver Medal of the Académie Française. A native Luxembourger who lived in London for 20 years, he currently makes his home in southern France.