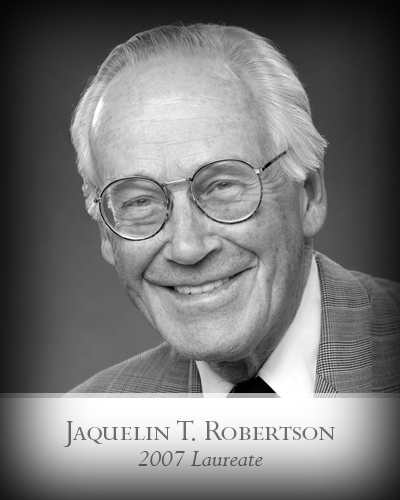 He has often said, “Architecture and urbanism, always together. It’s not the individual buildings but the aggregation of buildings, the urban setting, that really defines great architectural cultures.”

A partner in the firm Cooper, Robertson & Partners, Mr. Robertson founded the New York City Urban Design Group. He served under John Lindsay as the Director of the Mayor’s Office of Midtown Planning and Development and worked as a New York City Planning Commissioner. In 1975, Mr. Robertson directed the design of Iran’s new capital center, Shahestan Pahlavi.

Committed to introducing “human values into urban plans,” he founded the Jeffersonian Restoration Advisory Board and the Mayor’s Institute on City Design. He has been a consultant to the Ford Foundation, the Government of Jamaica, the Federal Highway Administration, and the National Capitol Development Commission in Canberra, Australia. To “learn more about the DNA of American architecture,” Mr. Robertson accepted an appointment as Dean of the School and Commonwealth Professor of Architecture at the University of Virginia in 1980, a position he held for eight years.

Mr. Robertson has received numerous design awards, including the 1998 Thomas Jefferson Foundation Medal in Architecture and the 2002 Seaside Prize for his contributions to American urbanism. A Richmond, Virginia native, Mr. Robertson received his B.A. and M.Arch. from Yale University and was a Rhode Scholar at Magdalen College, Oxford.