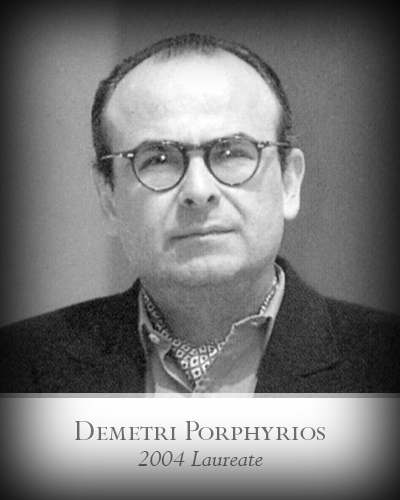 Demetri Porphyrios, laureate of the 2004 Richard H. Driehaus Prize for Classical Architecture, has redefined the classical idea by making it relevant to modern problems and sensibilities. His scholarly writings, coupled with his extensive built works, have provided us with examples that establish a theoretical focus for the classical idea that is fully embedded in modern life and culture.

Porphyrios’ work addresses contemporary urban redevelopment practices as well as contemporary building types such as the modern office building. His office buildings in Birmingham, Athens and London use innovative contemporary methods of construction adapted to provide large-scale uninterrupted spaces while holding true to classical and traditional relationships between the building and the city.

At the same time his work tackles the problem of architectural regionalism in the face of globalization by challenging contemporary attitudes tat have thus far been limited to architectural solutions of one international style or another. In contrast to the ubiquitous concrete, steel and class buildings of economic globalization that have little to do with a locality’s unique culture, geology, or climate, Porphyrios’ buildings characteristically take full advantage of the unique qualities that reinforce a sense of place. His work offers a perspective that develops not only an aesthetic approach grounded in local cultures, but also one that is sensitive to broader environmental concerns, with emphasis on locally procured materials and local methods of construction.

Porphyrios’ early scholarly work on the classically trained Finnish architect Alvar Aalto (1898-1976), as well as his association with Aalto’s office, plays a significant role in connecting modernist notions of precedent, typology, and language to the classical and modern traditions of the turn of the century whilst striving to establish a relationship with geographic and cultural sensibilities.

Porphyrios’ definition of classicism – that it “is not a style” or a narrow and confining doctrine, but rather “the philosophy of free will nurtured by tradition” is indeed at the same time profoundly modern and timeless. It is his approach that liberates the classical from any preconceived notions of an aesthetic singularity. In our contemporary culture, with its tendency to emphasize the differences rather than continuities, Porphyrios’ theoretical and built work provides a renewed testament to creative invention with its basis in humanity. His work seeks to reconcile history with design in contemporary architecture practice. Through Porphyrios’ interpretation of the classical idea we may see again that the highest aspirations of humanity expressed in our architecture and cities are timeless. It is especially because of this insight in Porphyrios’ work and writings that we recognize him with this prize.