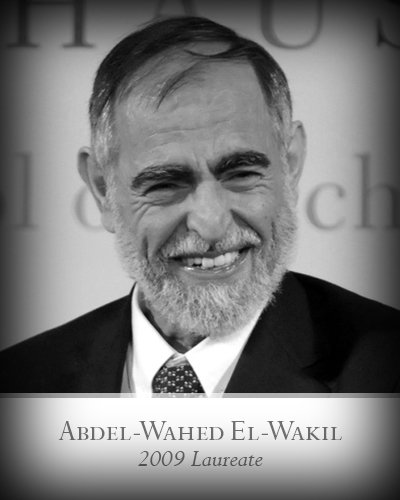 Traditional urbanism and architecture, which create the beauty and historic continuity in our built environment that we all cherish, also provide the only comprehensive approach to the very modern challenges of sustainability. Only those enduring principles address the full spectrum of issues involved: from regional land use and resource management, to the development of healthy communities and lifestyles, to durable, energy-efficient, non-toxic built environments. Building upon tradition and adapting those timeless ideals to enhance life in the 21st century will do more than almost any other “green” initiative to help sustain the planet.

That is in large part why the 2009 recipient was chosen—Abdel-Wahed El-Wakil’s quest for indigenous architecture, using materials beneath his feet, is based on traditional Arab designs and local craftsmanship. It is at once classical, beautiful and sustainable, honoring his heritage both in design and construction techniques, advancing that tradition through his own ideas and ideals, and contributing to a built environment that not only will itself endure, but that will help the planet itself survive.

Prof. El-Wakil once was quoted as saying, “To abandon tradition, to disregard the achievements and models of the past and to be caught up in the trauma of change means to be incapable of handling the new.” He also said, “Concerning my attitude towards design: I can cautiously say that I seek the essence within the natural order to guide and inspire my work. God Almighty has requested man to seek inspiration in the natural world.”

Abdel-Wahed El-Wakil, one of the leading voices in contemporary Islamic architecture and a practitioner known worldwide for his use of traditional form and technique, was named the 2009 Richard H. Driehaus Prize laureate. Over the past four decades, Abdel-Wahed El-Wakil has built mosques, public buildings and private residences throughout the Middle East maintaining balance between continuance and change. His work—which includes the Halawa House in Agamy, Egypt, for which he won his first Aga Khan Award for Architecture; the residence of Ahmed Sulaiman in Jeddah; and the Quba Mosque in Medina—celebrates the overall principles of Islamic architecture and culture while reflecting the regional character and locality in which each structure resides. He works with traditional design principles that use indigenous materials and processes, and integrates them with contemporary technology to create familiar, functional and environmentally sustainable structures that are both timeless and for our time.

The prominent King Saud Mosque in Jeddah, Saudi Arabia exemplifies El-Wakil’s traditional craftsmanship. Without use of concrete, El-Wakil created a magnificent indigenous brick dome with a diameter of 20 meters and a peak height of 40 meters. More recently at the request of the Prince of Wales, El-Wakil designed the Oxford University Centre for Islamic Studies. Integrating Islamic design concepts with traditional Oxford architecture was central to the project. The resulting complex, which houses a prayer hall, library, lecture theatre, exhibition gallery, classrooms, dormitories, gardens and courtyards, is one of the only contemporary structures on campus devoid of concrete and steel. El-Wakil is currently working on three projects in Beirut, Lebanon including the Ministry of Foreign Affairs, as well as a master planning project in Qatar that integrates best contemporary low-energy planning with climate-tempered Islamic built forms.